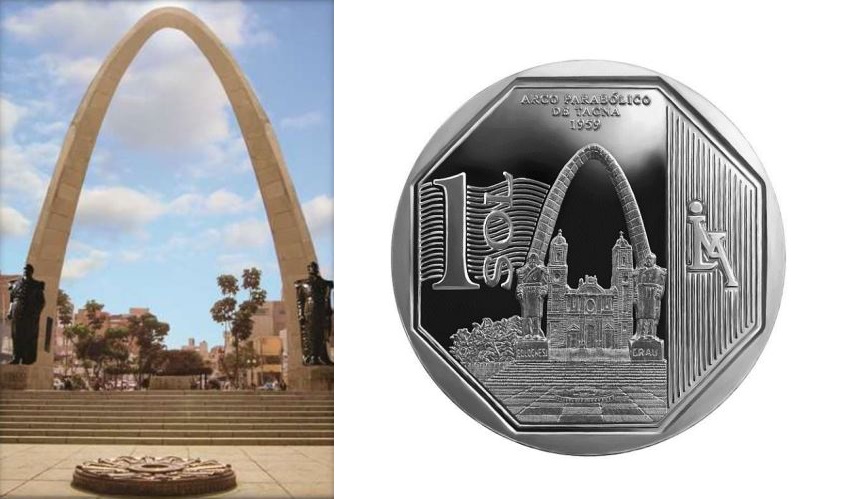 Peru’s central bank has issued a new sol coin featuring Tacna’s Parabolic Arch as the final edition of its Wealth and Pride series of collectors’ coins.

The bank issued 12 million of the coins featuring the southern city of Tacna’s iconic 60-foot arch made of cantera stone erected in 1959. Flanking the arch are two 10-foot bronze statues of Miguel Grau and Francisco Bolognesi, the most recognized heroes of the War of the Pacific, during which Chile occupied Lima for three years in the 19th century.

The Ancon Treaty which ended the conflict transferred Peru’s southern cities of Arica and Tacna to Chile, under the condition that each city would hold a referendum in 50 years to determine which country they would belong to.

The referendums were never held, however, after American delegate John J. Pershing declared Chile had engaged in an intimidation campaign against Peru’s sympathizers in those cities. Chile and Peru ultimately agreed to split Arica and Tacna respectively in the Lima Treaty of 1929, and Tacna was returned to Peru after almost 50 years of Chilean control.

“The oval arch reflects the shape of Paseo Civico [promenade],” the central bank’s presentation of the coin states. “The ‘Votive Lamp’ is found in front of the arch and down some steps. It is a bronze oil lamp in the shape of a plate, decorated with eight swords and eight anchors which represent the Army and Navy of Peru. The lamp is only lit for patriotic ceremonies.”

Peru launched its Wealth and Pride coin series in 2010, with each of the 26 coins representing cultural heritage from one of Peru’s regions. International coin collector organizations and critics have hailed three of the series’ coins, including the Inca Huaytara Temple in Huancavelica, the Santa Catalina Monastery in Arequipa and the Shipobo Conibo ceramics from Ucayali.

All of Peru’s Wealth and Pride collection coins are listed below: