Peru doubtful for 2018 World Cup after loss to Chile 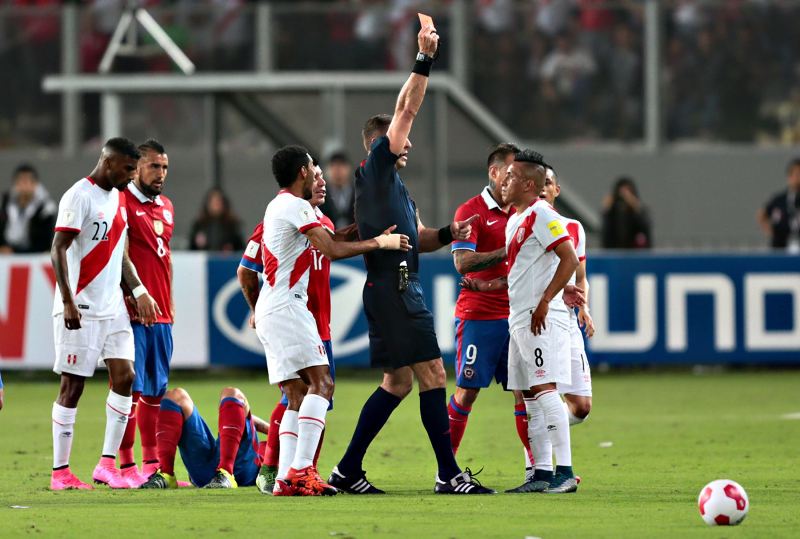 Peru needed a win at home against its historic rival, Chile, after a 2-0 loss to Colombia in Barranquilla in which the score does not reflect how close the game was. The game also gave Peru an opportunity to avenge its controversial loss to Chile in the Copa America, in which observers have alleged referee corruption for the absurd ejection of Carlos Zambrano at the 20-minute mark in an elimination match against the tournament hosts.

Arsenal striker Alexis Sanchez scored early in the match for Chile, but the game was quickly evened up by Peruvian midfielder Jefferson Farfan, who did not play in Colombia due to injury and was only recently cleared for last night’s game.

The decisive play came 23 minutes into the game when midfielder Christian Cueva drew a red card for throwing the ball at Chilean opponent Marcelo Diaz’s head, leaving the Peruvian squad shorthanded for most of the game.

“[Cueva’s ejection] was important. Before that, the game was pretty even, intense,” said Chile coach Jorge Sampaoli. “Christian Cueva is an important player. With his exit, we had control of the game. We wore out our rival.”

Despite being down a man, Peru took the lead 2-1 off a penalty kick from Jefferson Farfan, his second goal of the night.

Copa America star Eduardo Vargas tied the game just before the half off a play initially set up by Sanchez. Sanchez scored again soon into the second half to give Chile a 3-2 lead, and then became the start of the game by beating Peru’s defense in a run toward the goal and assisting a second Vargas goal to make the game 4-2.

While Chile should easily qualify for the World Cup after winning the Copa America and dispatching Brazil in its first World Cup elimination match, Peru’s second loss all but disqualifies the squad’s bid for an appearance in Russia in 2018. Next month the Peruvian squad will face a determined Brazil who will be playing on their own turf.

Peru’s star striker Paolo Guerrero scored late off a difficult angle in a surprise goal to make the game 4-3, but it was not enough to overcome the Copa America champions.

The night was not a complete failure for Peru, however, as a late goal from Ballon d’Or nominee Paolo Guerrero brought his career goals with the national team to 26, tying Teofilo Cubillas as Peru’s top all-time scorer.