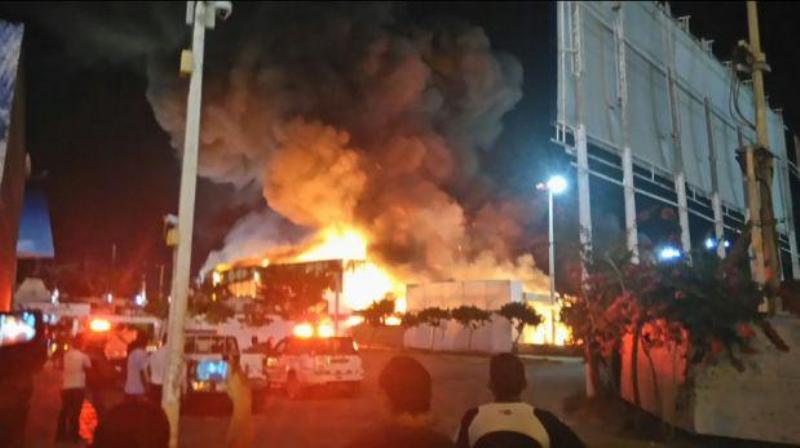 A blazing fire which destroyed a supermarket in the Asia district has brought scrutiny to the upscale beach community’s lack of water resources.

The fire at the Wong supermarket in the Boulevard de Asia shopping mall began Wednesday night completely burned out the structure before firefighters could bring the blaze under control. Employees and shoppers were safely evacuated as 36 firefighters had to use neighboring districts’ water resources to prevent the fire from spreading to other stores.

An official with the fire department told Canal N that the firefighters did not have enough water to battle the blaze. A nearby gas station provided water before six water tanks arrived around 10 p.m. The Asia district mayor told El Comercio the city has more than 1,300 cubic yards of water, but the low supply pressure is not compatible with the firefighters’ equipment.

“Asia belongs to the Cañete province and Sedapal only serves Lima and Callao,” a spokesman for Sedapal, Lima’s water authority, told El Comercio. “However, we are working with the firefighters to stock their tanks from our pump in San Bartolo.”

The San Bartolo water pump is 29 miles north of Asia. Despite emerging as one of the top beach destinations outside Lima, Asia has no fire hydrants or fire station.

The closest fire station to Asia is 10 miles away in the Mala district. On Wednesday night firefighters were called from as far as Callao.

Located 60 miles south of metropolitan Lima, Asia lies within the Cañete province and its water supply is managed by the Cañete water authority, Emapa.

Asia emerged as one of Lima’s hottest beach destinations when a construction boom starting in 2009 tripled the number of annual visitors every summer to 2 million.