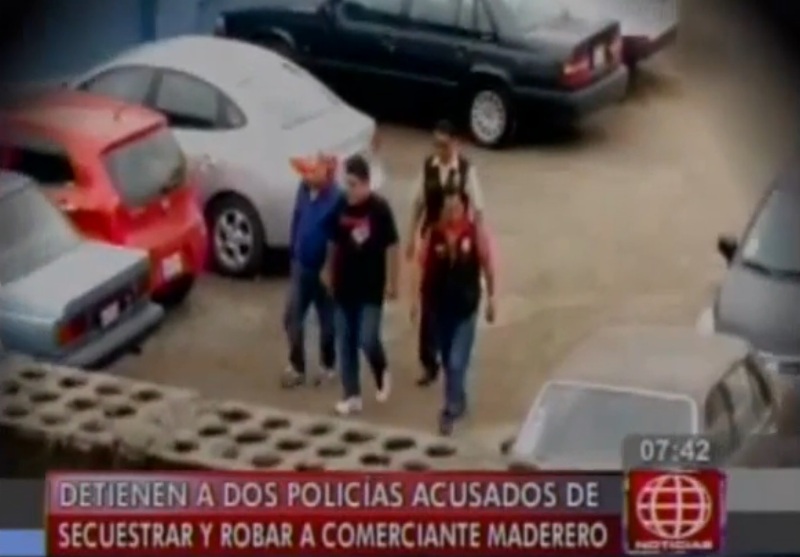 Police have arrested two officers and are searching for two more in the kidnapping and extortion of an Ucayali businessman in Lima.

Jose Luis Medina, an independent lumber vendor from Pucallpa, had just withdrawn over $12,000 from a Lince bank when he was approached by two plainclothes police officers who shuffled him into another car.

According to Medina, the officers threatened to charge him with drug trafficking if he did not give them all the cash he could get.

“They put a backpack on my leg and inside were three rectangular packages,” Medina told America TV. “They told me it was drugs and that it was mine.”

Medina says the officers then brought him to the Lince police station, where they stripped and beat him. Under interrogation, Medina told them he had $4,500 left in his bank account. The police brought him to a bank to withdraw his remaining balance, but they arrived after the bank closed and Medina could only withdraw a little over $500 from the ATM.

According to Medina, the police decided to hold him in a Lince hotel overnight until the bank opened in the morning. They rented three rooms and locked Medina into one of them. While the police sent for prostitutes and beer, Medina was able to tell a hotel security guard to call the police.

When a police response unit arrived at the hotel, they arrested two of the conspiring officers and freed Medina. Police are searching for the other two officers suspected of being involved.

“They work in the Lince intelligence division, and they did not show up for 8 a.m. formation today,” Lima police chief Salvador Iglesias told El Comercio.