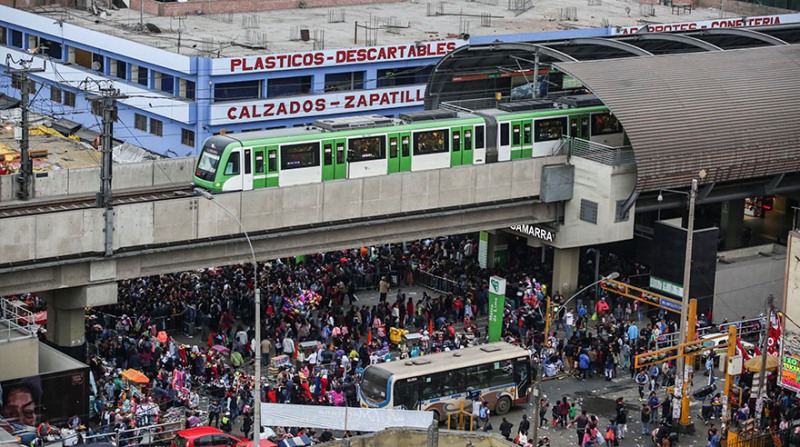 Peru’s comptroller has issued a report detailing problems with the construction of the second line of Lima’s Metro which could cost the state $156 million.

Comptroller Edgar Alarcon gave a press conference last week to highlight five “irregularities” in the execution of the project by Consorcio Nuevo Metro de Lima, a consortium of six companies from Peru, Spain and Italy.

Alarcon also singled out 23 officials from Peru’s ProInversion, the finance ministry’s agency tasked with attracting private investment for infrastructure projects. However he did not suggest any suspicion of corruption at this point, but a lack of rigorous study in the contract’s design and execution.

The comptroller’s report lists the costliest errors as ProInversion’s decision to move the construction’s start date up in order to open the first section in July of this year and the use of more expensive methods to excavate the land needed for the underground tunnel.

“The comptroller recommends that the Ministry of Transport and Communications (MTC) implement monitoring and control mechanisms to ensure that the projected benefits used to support the decision to advance construction are realized,” the report states. “If this measure causes economic losses, legal action should be taken to compensate the state for damages.”

The report states that a decision last year to move the start date would allow the early opening of a small section spanning 2.7 miles in Ate. But the short distance between Ate and Santa Anita would attract less than a third of the demand projected in the feasibility study. The lost revenue could boost the state’s subsidy from $39 million to $63 million as potential users opt for buses at less than half the cost of the train.

The report also faults ProInversion for approving the consortium’s use of traditional excavation methods in clearing the tunnel. Instead of using giant tunnel-boring machines, which are expensive but can clear land cheaper, the builders have used excavators, hydraulic breakers and explosives for much of the work. The failure to use the tunnel-boring machine could cost the state an extra $81 million.

In addition to being slower, the use of excavators also poses a greater risk to the surface of the ground and creates more complications in the tunnel’s construction. According to the report, the contract doesn’t go into sufficient detail about who should bear the extra costs of various contingencies which could arise during construction. The state is listed responsible to pay for unforeseen contingencies.

Timeline benchmarks not being met by the state, particularly in delivering the required land, according to the report. The comptroller says the feasibility study didn’t take into account how long expropriations of land have taken in other large projects. As a result, the project which should have opened the first section in June is now delayed by at least 15 months.

“We will make an effort to understand the problems so this project is ready by Peru’s bicentennial. We believe that it can be completed by 2021,” transport minister and Vice President Martin Vizcarra, who took office two weeks ago, told reporters. “This project should be done in five years. If it has been going for two years it should be 40% complete, and it’s worrying it’s not even at 10%.”

But Vizcarra pledged to open the second line, which is forecasted to transport 600,000 passengers per day in its inaugural year, by the end of President Pedro Pablo Kuczynski’s government in 2021.

“It can’t be that Lima, after 200 years as a republic, with more than 10 million people, does not have a means of mass transportation. This line will be the backbone, going from Ate through downtown and ending in Callao.”

The contract to build Lima Metro’s second line was awarded in 2014. The $5.3 billion project is projected to ultimately transport 1 million passengers per day. The transport ministry projects the line will reduce travel time from Ate to Callao from over two hours currently to just 45 minutes.