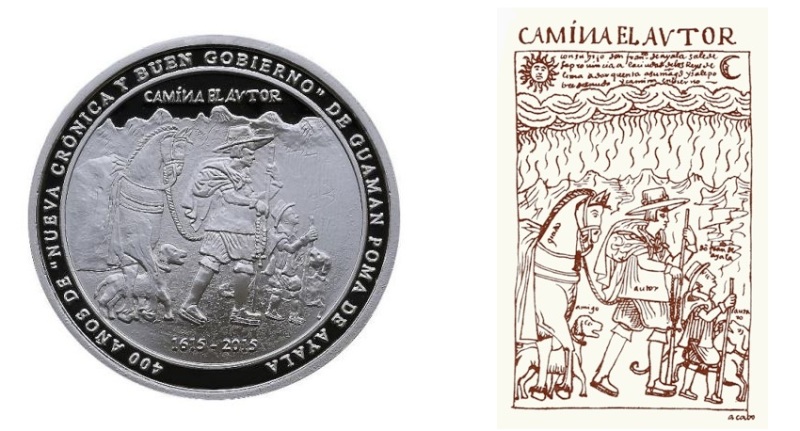 On the front of the coin is one of the book’s illustrations, “The Author Walks,” Poma’s signature image of himself walking with his son, a horse and a dog with the Andes mountains in the background. Poma lived in both Cusco and Huamanga, now known as Ayacucho, from 1535 to 1615.

Poma published his 1,188-page book featuring 398 drawings addressed to Spanish King Felipe III sometime between 1600 and his death. Poma intended to highlight the colonial abuses of the native population and proposed that indigenous leaders assume a greater role in governing Peru.

However historians believe the king never read the book. It was only discovered in 1908, almost 100 years after the Spanish were expelled from Peru, by a German researcher in the Royal Danish Library in Copenhagen, where the book remains today.

According to historian Raquel Chang, “Poma’s efforts highlighted a new social subject, the bicultural and multilingual Indian who often, as in the case of Guaman Poma, manages a complex network of information and serves as a bridge between the various interests that make up the complex colonial society separated into two republics, one Indian and one Spanish.”

The coin is part of the central bank’s cultural heritage collection commemorating anniversaries and events from Peruvian history. Other coins in the collection feature Jose Carlos Mariategui, Cesar Vallejo and the founding of the El Comercio newspaper. A Mariano Melgar coin was issued in August.