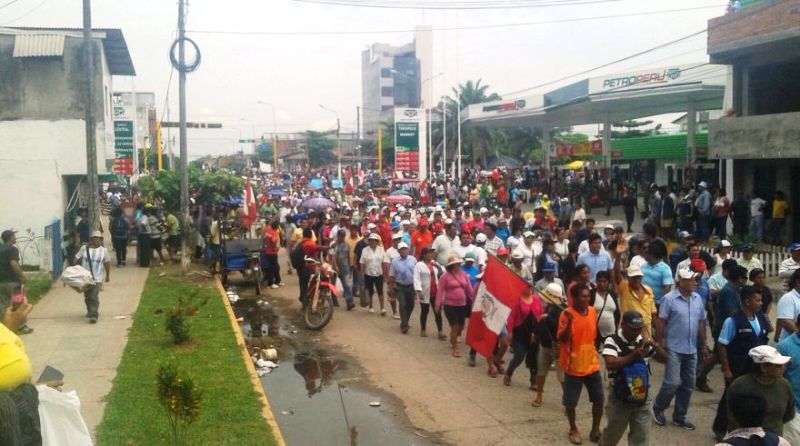 Peru’s eastern state of Ucayali will complete one week under a paralyzing protest over the increased cost of electricity and other services.

The Ucayali Department Defense Front launched an indefinite protest on March 9 to protest the 38% increase in the price of electricity this month. Several indigenous groups have joined the protest which is also demanding reductions in the prices of water, cooking gas and telephone service.

Protesters have blocked roads and burned tires in Ucayali’s provincial capital of Pucallpa since the start of the protest. The state government has indefinitely suspended 1,700 schools for 148,000 students in the Coronel Portillo and Padre Abad provinces.

El Comercio reported that several businesses in downtown Pucallpa were looted on Monday. Protesters broke windows in the district’s businesses, banks and hotels. Police have arrested at least 33 people.

“They are blocking roads with trucks provided by the loggers,” a Pucallpa resident told RPP. “Protesters charge $1.50 to $3 for access to main streets, and $3 per half-mile. They do not want anyone to work. They are even calling for stores to be taken over on social networks.”

In addition to reducing the cost of basic utilities, protest leaders are also demanding the national government stop charging sales tax on all products sold in Ucayali, where many transactions are exempt from sales tax under an initiative to encourage investment in the Amazon jungle regions.

Finally, the protest leaders in Peru’s top producer of lumber want to negotiate various forestry issues. They say that the government’s measures against illegal logging are being improperly used to persecute formal loggers.

“It is time for the government to make political decisions and meet the demands,” a protest leader told El Comercio.

The local electricity company, Electro Ucayali, said in a statement that the price hike was settled with Peru’s electricity regulator, Osinergmin.

Peru’s government announced a high-level commission would establish talks in Pucallpa on March 22. The commission will include officials from the housing, environment, agriculture and mining and energy ministries.