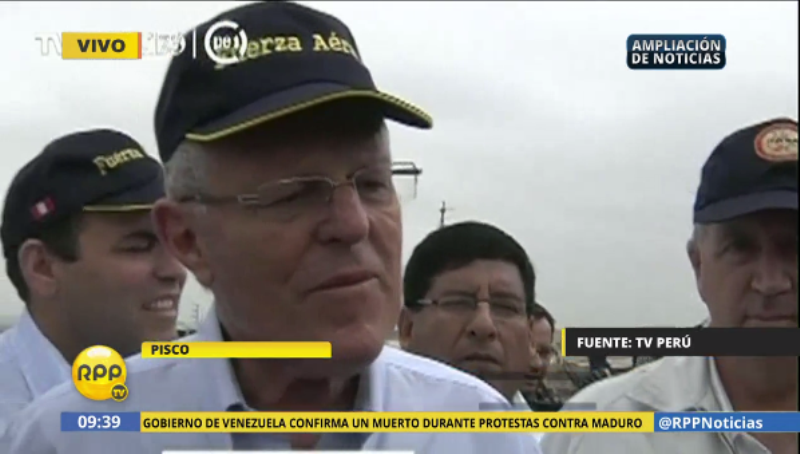 Peru’s government is taking a leading role in pressuring the government of President Nicolas Maduro in the midst of Venezuela’s political crisis.

Peru’s president and Congress on Thursday both called on the Organization of American States (OAS) to invoke its Democratic Charter against the government of Venezuela. The news came one day after the “Takeover of Venezuela” protests which saw hundreds of thousands march against Maduro’s government.

Peru’s Congress on Thursday passed a resolution which stated that Venezuela President Nicolas Maduro had staged a “coup d’etat” and demanded that Peru recall its ambassador from Caracas. President Pedro Pablo Kuczynski, who has long called for pressure on the socialist country, signaled his intention to convince regional leaders to invoke the OAS’s Democratic Charter.

“The undersigned members of Congress of a multi-partisan nature [condemn] the acts the government of Venezuela has systematically implemented to impede the realization of a recall referendum, which constitute a break in the constitutional order and unacceptable coup d’etat,” reads the congressional resolution which passed with 81 votes in favor and 13 against.

The resolution expresses support for Venezuela’s opposition-controlled legislature, which the country’s government-controlled Supreme Court has deemed in contempt and annulled all of its votes, and calls on Venezuela’s government to respect the life and rights of its citizens.

“We will be in Cartagena, Colombia tomorrow with Latin American leaders and we have forwarded the proposal to invoke the Democratic Charter of the OAS,” Kuczynski told reporters in Lima on Thursday. “And at the same time, prepare a humanitarian-aid operation for Venezuela because we all know that there are problems of food and medicine.”

In the midst of a shift away from populist leftism in regional governments, Peru is leading Latin America in mounting pressure on Venezuela in the midst of its political crisis. While other governments including Mexico, Brazil, Argentina and the United States are expected to support the measure if it ever comes to a vote, no other government is pressing the issue harder than Peru.

Despite widespread calls in the international media for diplomatic pressure, President Barack Obama has shied away from confronting Venezuela, citing the damage done when the government of George W. Bush endorsed an unpopular coup against Hugo Chavez in 2002.

Colombia, Venezuela’s closest neighbor and a staunch U.S. ally, has avoided engaging Maduro so as not to complicate peace talks with Marxist rebel groups. Meanwhile, new governments in Brazil and Argentina which are friendlier to the United States and OAS have avoided antagonizing Venezuela in favor of focusing on their domestic agendas.

In this geopolitical terrain, Peru has emerged as the loudest voice of condemnation against Venezuela’s government. The only opposition came from Peru’s leftist Broad Front party, which has repeatedly characterized efforts to condemn the government of Venezuela as biased and politically opportunistic. However only 13 of the party’s 20 legislators showed up for the vote, one day after high-profile congresswoman Marisa Glave spoke out against Maduro on her Facebook page.

The OAS’s Democratic Charter was drafted in response to the autocratic government of former President Alberto Fujimori, which many considered a dictatorship. But Fujimori’s was the first in a modern era which rule autocratically under the guise of democracy and mixed signals, instead of hard coups and military strongmen.

Fujimori systematically undermined the courts, legislators, military and media with bribery, high-ranking positions and intimidation. But he strived to hold elections and tolerated a free press to maintain the façade of a free democracy before the OAS and international community.

After the fall of Fujimori, the OAS drafted the Democratic Charter in an attempt to discourage the subtle consolidation of power by providing a mechanism for neighboring countries to suspend a country’s membership if it violated democratic principles.

The only time the OAS has invoked its charter was when the Honduras military ousted President Manuel Zelaya in 2009. Honduras remained suspended from the OAS until 2011.

While suspension from the OAS would not carry any hard consequences, it sends a diplomatic message to governments and institutions from around the world that a government is a pariah in its own region. A suspension would hurt Venezuela’s chances in obtaining loans or convincing OPEC countries to cut oil production, two objectives it has failed in achieving this year anyway.

Invoking the Democratic Charter would lead to a vote whether to suspend Venezuela from the OAS, which requires a two-thirds majority from member states. OAS secretary and former foreign minister of Uruguay, Luis Almagro, called to invoke the charter in June. In a preview of how a pending vote could play out, Venezuela tried to kill the special session by voting down the agenda before it began.

While the body voted to hold the meeting by simple majority, the 20 countries in favor would not have been enough to suspend Venezuela’s membership among the 34 member states who voted. Venezuela counts enough support from tiny states like Dominica, Grenada and St. Vincent to block a super-majority condemnation.

Of the 12 countries which voted with Venezuela, nine received subsidized oil under Hugo Chavez’s Petrocaribe program. The other three votes came from ideologically-aligned governments of Bolivia, Ecuador and El Salvador.

Shoot out at the OAS corral: the vote over the June 23 agenda (Latin America Goes Global)

The OAS and Venezuela: is that it? (Latin America Goes Global)