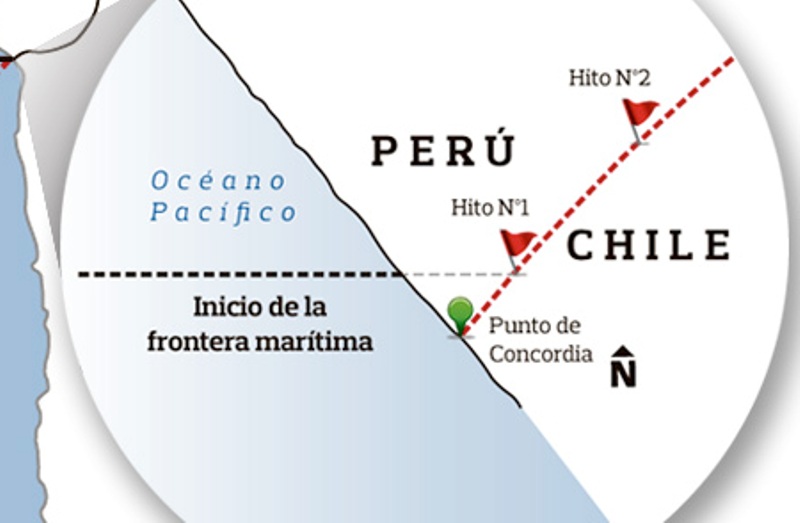 Chile has protested Peru’s creation of a new district on the two countries’ border which includes the contested “terrestrial triangle.”

Last Thursday Peru’s Congress approved the creation of the La Yarada Los Palos district on the border with Chile in the southern state of Tacna. Chile’s foreign affairs minister Heraldo Muñoz immediately voiced his opposition to the law’s use of Punto Concordia as the district’s southern border.

At question is nine acres of desert between Peru’s and Chile’s respective interpretations of the land border.

The International Court of Justice used Point 1 as the reference point in its 2014 ruling which settled the two countries’ maritime border dispute. The ruling which gave Peru over 19,000 square miles of rich fishing waters places the maritime border 700 feet north of the Punto Concordia.

However a reply from Peru’s foreign affairs ministry cited the 1929 treaty in its reply. “The Peruvian government safeguards the rights and the sanctity of the land border with Chile, which starts at Punto Concordia, in accordance with the Treaty of 1929.”

“As far as Chile is concerned, there is no ‘terrestrial triangle’. That space is national territory.”

“As far as Chile is concerned, there is no ‘terrestrial triangle’. That space is national territory,” Muñoz said. “The public should be assured that the government will defend its national interests and exercise all the rights given to Chile in this area. Chile hopes to, ultimately, prioritize a sense of neighborliness and integration with vision and mutual benefit in its relations with Peru.”

But their Peruvian counterparts maintain that the 1929 Treaty of Lima places the “terrestrial triangle” in Peruvian territory. Humala sent an explanatory note to the Hague in May when his government learned that Chile had used Point 1 in evidence in its current dispute with Bolivia over access to the sea.

Chilean officials have accused President Ollanta Humala of instigating border conflicts to rouse nationalist sentiment at a time when his approval ratings are at an all-time low.

Peru charged three members of its navy with espionage this year for providing information to the Chilean navy.