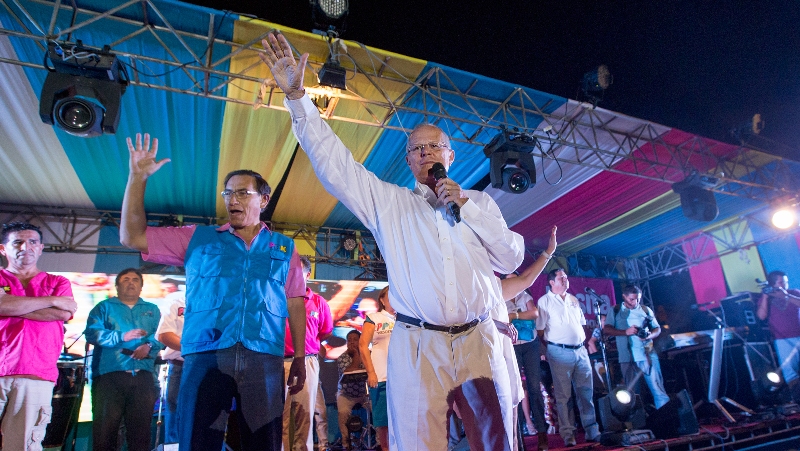 Peru’s elections board has ruled that Pedro Pablo Kuczynski and Alan Garcia will not be disqualified in finishing a chaotic year for the country’s electoral law.

The resolutions surprised few after the JEE special elections tribunal ruled presidential frontrunner Keiko Fujimori would not be disqualified for attending a break-dancing event in which contest winners received $89 in cash prizes. In fact, the rulings on Kuczynski and Garcia did not make the top headlines within Peru as they were announced.

Former President Alan Garcia faced similar charges when video of a campaign event in Callao showed an emcee announcing free beer and a raffle for cellular phones. However the JEE said that it would review possible sanctions against the APRA, Popular Christian Party or Let’s Go Peru parties which make up the Popular Alliance coalition backing Garcia as its candidate.

The electoral board disqualified two candidates in Julio Guzman and Cesar Acuña with just one month before the April 10 elections. The board has drawn harsh criticism for its removal of two “outsider” candidates while ruling in favor of candidates like Fujimori, Kuczynski and Garcia.

“In this case the law is an ass, is being misapplied and, it seems, is not the same for everyone,” writes The Economist. “If Peru is to remain a Latin American growth star, it needs reforms that only a strong and credible government can provide.”

“The touchstone for these should be: the simpler the better. They should deter wrongdoing, not upend elections because of procedural slip-ups. Above all, if in doubt, don’t ask the lawyers to decide: look to the voters instead.”

However observers within Peru have rejected international condemnations of the 2016 elections, specifically Organization of American States (OAS) secretary general Luis Almagro’s characterization of the election as “semi-democratic.”

Fujimori points out that the OAS delegation in Peru has not raised objections about the exclusions, despite what Almagro said. Kuczynski implied a double standard from Almagro for focusing on Peru’s democracy while ignoring Venezuela.

“Without evidence or facts, it would be irresponsible for the representative of an international organization to question the democratic process in one of its member countries,” reads the El Comercio editorial, “Uninformed accusations.”

“[It is also] irresponsible for the former presidential candidate [Julio Guzman] to claim to represent a new and serious manner in politics and then report a ‘blatant electoral fraud’ without any evidence.”

Guzman was in a statistical tie in a hypothetical runoff against Fujimori when he was disqualified. Leftist candidate Veronika Mendoza has since surged in polls to challenge Kuczynski to qualify for a second-round vote.

Peru’s general elections will be held this Sunday. The runoff, if necessary, is scheduled for June 5.

A dangerous farce (The Economist)