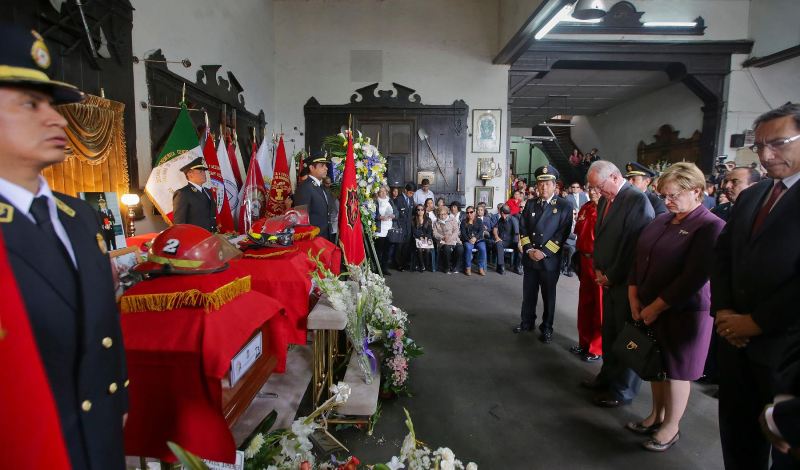 Three volunteer firefighters died while trying to save workers trapped inside a factory as it burned in Lima’s El Agustino district on Tuesday.

Local residents called the fire department Tuesday night at 7 p.m. to alert them of a fire at a shoe factory in El Agustino, just east of downtown Lima. Thirty vehicles transported more than 150 firefighters from stations in the area to battle the flames.

Around 11 p.m. the firefighters received reports of people trapped inside the factory. Three firefighters entered an adjacent parking lot and managed to climb the roof in an attempt to enter the building. The roof ultimately collapsed, trapping the men inside the burning factory.

“My deepest condolences to the families of firefighters Alonso Salas, Raul Lee Sanchez y Eduardo Jimenez for this unfortunate tragedy,” President Pedro Pablo Kuczynski tweeted. “The work of a firefighter is exemplary. We will work to improve the conditions in which they work.”

A wake held on Wednesday was attended by President Pedro Pablo Kuczynski, Lima mayor Luis Castañeda and other officials. The three firefighters were each awarded the City of Lima Medal, the highest distinction public servants can earn.

As the entire country mourns the loss of the men, the tragedy draws attention to the insufficient compensation plans Peru’s firefighters receive. CGBVP commander Cesar Garcia told Canal N that Peru’s firefighters do not receive healthcare insurance. They are only covered for injuries suffered while fighting a fire, which would not cover accidents at the fire station.

Garcia said that firefighters do not receive a pension upon retiring, only a one-time payment of $20,000 if they are killed in the line of duty. He also pointed out that firehouses are seriously underequipped.

“We have to think of some sort of compensation or pension for firefighters,” Kuczynski told Andina. “I know they are volunteers, but there must be some payment for this service to society, which does not exist today.”

Popular Force congressman Carlos Tubino announced on Wednesday that he would submit a bill which prohibits the firing or restricting of volunteer firefighters from leaving their normal jobs to respond to an emergency.

“There is much to be done for firefighters, and I also suggest better equipment,” Tubino told Andina. “Unfortunately we only examine ourselves when these things happen. We are a country that is sensitive to these things, and these initiatives move faster when this happens.”

The fire also consumed at least half of a health ministry warehouse located next door to the shoe factory. Popular Force congressman Hector Becerril suggested that the fire may have been set in order to destroy incriminating evidence in the wake of the corruption scandal involving former presidential adviser Carlos Moreno.