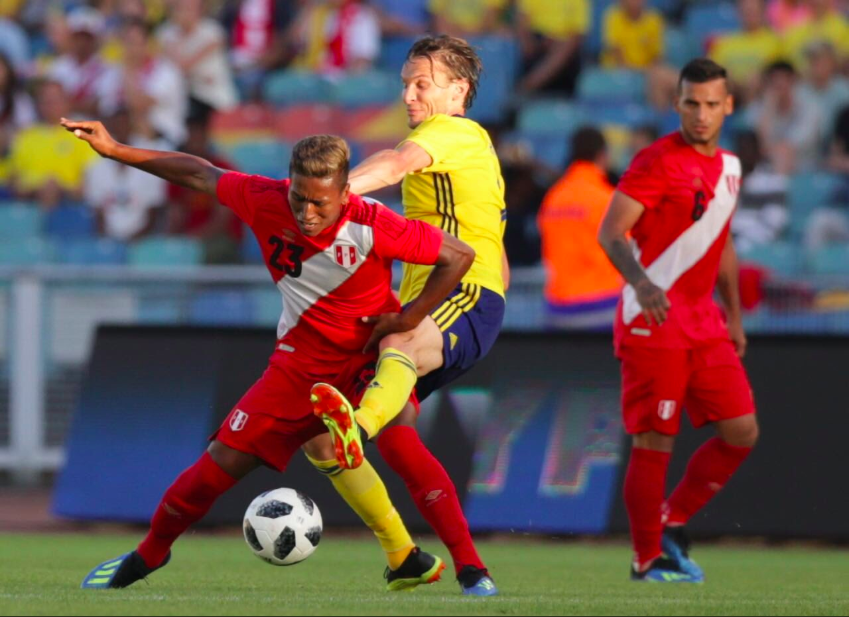 As the reality of Peru’s first World Cup in more than three decades descends upon La Blanquirroja, nerves finally seemed to catch up to the previously unflappable side. But by the end of its scoreless Saturday friendly, Peru settled down enough to keep its undefeated streak alive at 15 matches at it tied home-sided Sweden 0-0 in Gothenburg.

The fellow World Cup qualifier Swedes were superior in moving the ball in the opening minutes, getting two good looks near goal though they couldn’t manage to get a shot off either time. In the 14th minute, a beautiful setup from Sebastian Larsson was missed wide by Ola Toivonen.

Peru’s first sign of life came in the 27th minute after a strong run from Luis Advincula, who sliced through Sweden’s defense before passing it off to his left where Jefferson Farfán couldn’t convert what looked like a great scoring opportunity. Farfán got the start in the No. 10 spot over Edison Flores, as head man Ricardo Gareca tries to find ways to have both goal-scorers Farfán and captain Paolo Guerrero on the field at the same time.

In the 40th minute, an acrobatic attempt from Viktor Claesson was denied nicely by Pedro Gallese and Sweden floundered a wide-open rebound off the block.

The second half saw a steep decline in the pace, especially after Guerrero and Swedish goalkeeper Robin Olsen collided in midair, leaving both players down momentarily. Following the collision, both sides seemed content getting out of their final World Cup tuneup without any injury casualties.

Following Peru’s win against Saudi Arabia last week that extended the selection’s undefeated streak, the team has now gone 15 matches without losing in a historic run that stretches back to late 2016.

Gareca’s side will try to carry the impressive momentum as it now turns its entire focus to Russia where it will open World Cup play in exactly one week. There Peru will start off with another Scandinavian side with Denmark when the two sides ending long cup droughts will meet on June 16 in a tough Group C that also includes France and Australia.