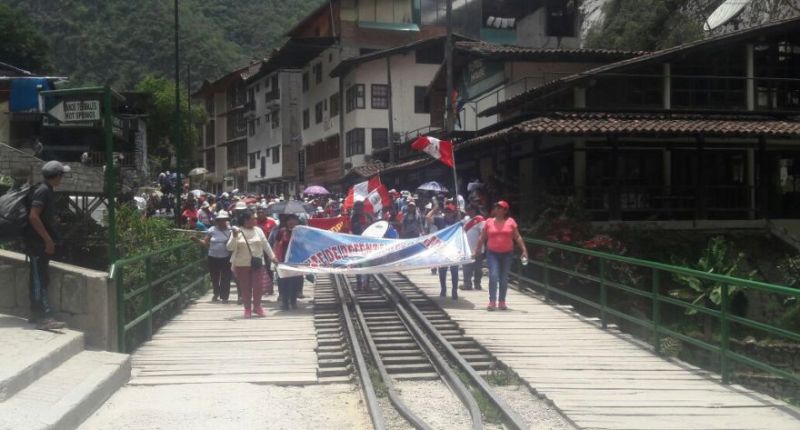 A protest by hundreds of residents of a village below Machu Picchu in southern Peru blocked a key railroad, preventing thousands of tourists from visiting the Inca ruins.

The Machupicchu district, also known as Aguas Calientes, in the southern state of Cusco’s Urubamba province is home to just over 8,000 people. The economy is driven entirely by its prime location at the entry point of Peru’s top tourist attraction, which receives over 3,000 visitors per day on average.

Over 500 residents of the area announced last week a 48-hour protest in which they would block a key railroad which brings tourists from the state capital of Cusco 50 miles away. While some tourists reach Machu Picchu by bus or hiking, the vast majority take the train operated by PeruRail. Blocking the rail line effectively brought visits to Peru’s top tourist attraction to just a few hundred per day.

The protesters have demanded concessions from both Peru Rail and Peru’s culture ministry. They want the railway company to reserve two passenger cars of each train for residents of Machupicchu, two for residents of the Urubamba, Anta and La Convencion provinces and two more for Peruvian nationals. They also want the company to stop selling lunches and souvenirs on the trains.

The protesters also demand that Peru’s culture ministry drop plans to build a $38-million museum outside Machu Picchu which they believe will attract hotels which compete for tourist purchases.

Other demands include ending the culture ministry’s policy of not allowing tour guides to sell entrance tickets to Machu Picchu, a revision by the Cusco state government of a local hotel operator’s license and better internet coverage from Telefonica.

Protesters announced after the two-day strike that they would extend the protest indefinitely until their demands were met. However they agreed to a 10-day truce on Thursday morning after government officials agreed to hold talks.

Machu Picchu is Peru’s top tourist attraction, accounting for over 40% of total entrances to official sites. The Inca citadel received more than 1 million annual visitors for the first time in 2013, and a record 1.2 million visited in 2015. Three quarters of Machu-Picchu visitors are foreign tourists.

Last year a Cusco labor union held a citywide strike which blocked the railroads, shutting down tourism to Machu Picchu in their demand to prevent a law which would allow private companies to restore and operate archaeological sites. The bill was ultimately repealed by Congress.

The protest comes as Peru is set to host the 28th edition of the APEC World Leaders Summit, the second time the 21-nation group meets in Peru. It is the second blow to Peru’s tourism after a fire killed four people at the Larcomar mall in Lima on Wednesday.