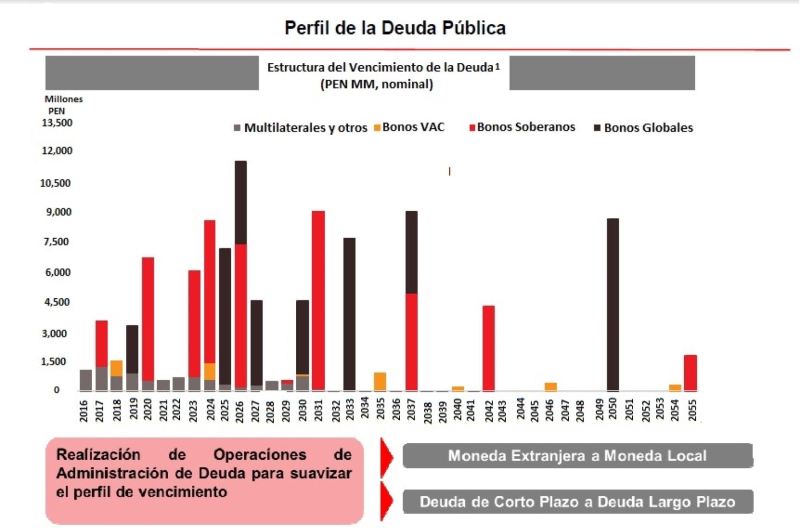 Peru has issued $3 billion in sol-denominated bonds in an operation which reduced its dollar-denominated debt and extend average due dates.

Last Wednesday Peru’s finance ministry issued $3 billion of sol-denominated bonds maturing in 2028 which yield 6.375%. The new security and its proceeds were used in debt swaps and buybacks to reduce interest rates on outstanding debt as well as to convert dollar-denominated debt to soles and simplify amortization schedules.

“We are preparing for a scenario of increasing rates at the Federal Reserve and therefore more volatility,” finance minister Alfredo Thorne told El Comercio. “As a result of the operation, we have reduced the interest-rate expense, we have reduced the value of the debt and we had phenomenal demand [for Peruvian debt] of about $7 billion, for an exchange of $3 billion.”

The issue ultimately swapped $700 million of dollar-denominated bonds, 70% of which were set to expire next year, increasing the government’s sol-denominated debt from 45% to 47%. Thorne said that the government would wait for news from the Federal Reserve and U.S. elections before more operations.

Thorne said the bond was the largest ever issued on the international stage by an emerging market in its local currency. While 2015 saw the greatest capital outflows from emerging markets since the 1980s, Thorne told Andina that demand for debt from strong emerging markets like Peru is driven by Brexit, sustained quantitative easing in Europe and the election of Pedro Pablo Kuczynski.

Peru’s total debt is just 25% of GDP, by far the lowest among Latin American countries with investment-grade ratings. Peru saw its lowest interest rates in 17 months after Kuczynski was elected president in 2016 elections. Kuczynski told Bloomberg that “we’d be crazy not to” refinance given the demand.

Creditors were offered to sell their existing bonds for cash or trade for the new bond. Peru ultimately bought back sol-denominated bonds yielding as much as 8.6% and dollar-denominated bonds earning as much as 8.75%, in exchange for the new sol bonds yielding 6.375%. The government also consolidated eight different maturity dates spanning between 2017 and 2033 to just one in 2028.

Thorne said the operation reduced the government’s liabilities by $70 million in a year when the fiscal deficit is the highest since 2000 at 3% of GDP.

Invesco portfolio manager Sean Newman told Reuters that the swap will have a positive impact on Peru’s exposure to currency volatility and improve its credit ratings.

In interviews after the issue, Thorne said that the finance ministry would turn its attention to the local market via short-term treasury bills. The government plans to use decree powers to more than double the limit on t-bill debt to $1.2 billion, which Thorne hopes will attract more market makers and boost liquidity to develop Lima’s financial markets.

“Investors are worried because there isn’t much liquidity in the local market,” Thorne told Reuters. “We want it to be as liquid as dollar bonds so investors can move between one market and the other freely.”