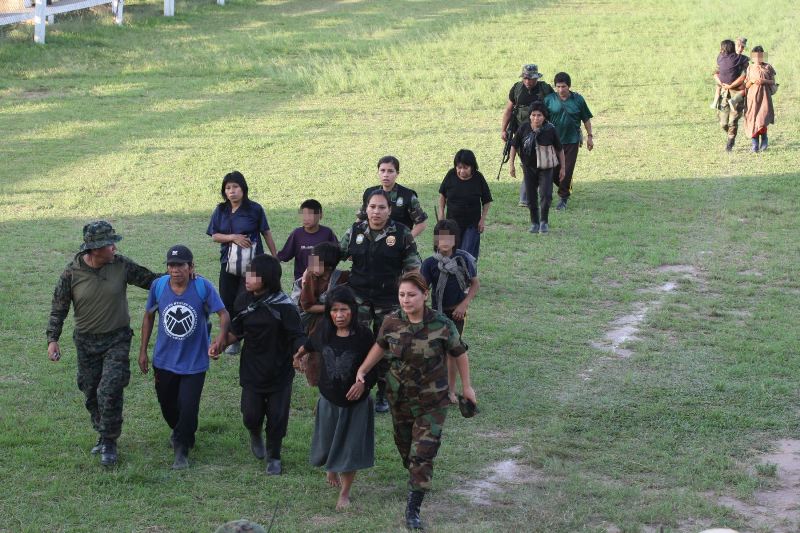 Peru’s special forces rescued 26 children and 13 adults from forced captivity in a Shining Path camp in Junin on Monday.

The 39 hostages were held in a “production camp” located in what is known as Sector 5 near the Ene river in Satipo province of Junin state. The rescued captives were transferred by helicopter to the Mazamari military base.

In the production camp, the women are forced to raise crops and livestock as well as have sex with the guerrillas to give birth to future Shining Path rebels.

In addition to working the fields, the children receive instruction in Maoist and Marxist economic theory as well as weapons training. When the boys reach 14 years of age, they leave the camp to join rebel units.

“This operation aimed to rescue people in captivity by the Shining Path in what are known as ‘production camps’. A production camp is an area where terrorists concentrate children to work in the fields and raising livestock, and the young women to get pregnant and give birth to ‘pioneers’. So Shining Path children to indoctrinate them and continue the war,” said Peru’s deputy minister of defense Ivan Vega.

“Jose Quispe, the top criminal terrorist at Shining Path, should understand that the civilian population cannot be made slaves. There is no slavery in Peru, the government will not allow it,” Vega said. He added that “[Because of the operation,] the Shining Path lost an important source of labor.”

The children ranged in age between one and 14 years old. Many of the children and young women were Ashaninka Indians. Some of the oldest women were kidnapped 25 years ago from the Puerto Ocopa monastery in the Concepcion province of Junin.

“Many of these children were born [in the camp]. They are a product of rape by the Shining Path guerrillas. All the older adults have links to the areas outside of the VRAEM. They will give us clues and the information necessary to locate their families,” Vega said.

The operation dubbed “Reunion 2015” included agents from the Direction Against Terrorism (DIRCOTE) and Intelligence Command and Joint Special Operations (CIOEC) special forces. The Shining Path camp, one of several known as “mass production” by Shining Path leaders Victor and Jorge Quispe, was discovered after receiving information from a converted rebel.

The military’s search for the camp began last Thursday. On Monday, 120 CIOEC commandos and four helicopters descended on the camp and arrested Comrade Ricardo without any shots fired. The captives were initially afraid of the soldiers because they had been taught the military would kill them.

DIRCOTE police director Jose Baella told La Republica that the children rescued in the operation represent about one third of Shining Path’s total production force. “We have identified other camps where the children of the main Shining Path leaders are being held. We hope to free all of them. This operation represents a huge step in that direction.”

One of the rescued women said she did not want to be transferred to Lima. “We are accustomed to our land. The government should give us land, school and healthcare so we can stay here,” she said. The former captives are currently being held at a military base in Mazamari. Their fate is still undecided.

“These women, according to the information we have, have been kidnapped for 25 to 30 years, subjected to constant violence, practically in a situation of repeated rape,” said Marcela Huaita, minister of women and vulnerable populations. “[Reintroducing them into society] is not an immediate process. It takes some time. These children have been indoctrinated … In the coming days we’ll see if these children will remain in the region or moved somewhere else.”

Police estimate there are 100 others living in captivity by the Shining Path. “The terrorists are in the Vizcatan area, on the borders of Ayacucho, Junin and Huancavelica. There are still people in captivity, but I don’t believe there are more than 100,” said general Vicente Romero.