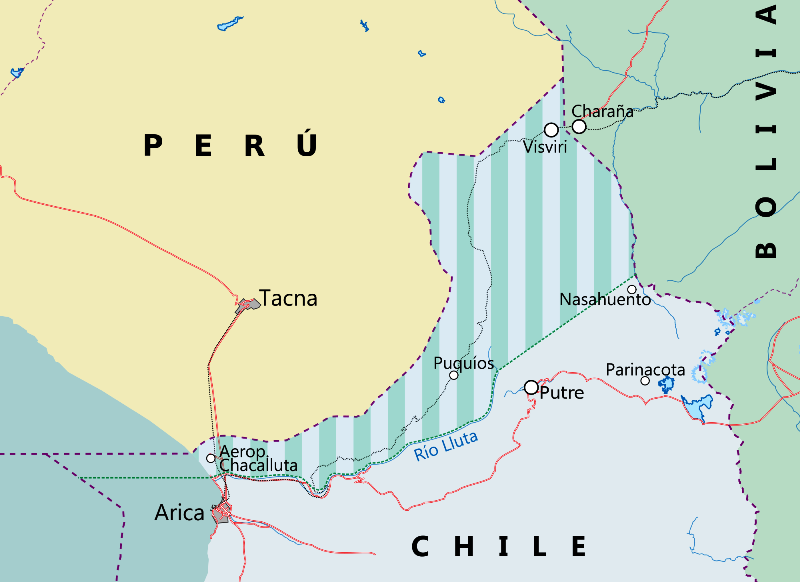 A new diplomatic spat has risen with Chile over Peru’s declared support for Bolivia in its claim for sovereign access to the Pacific Ocean.

Chile President Michelle Bachelet canceled a meeting with President Ollanta Humala and Chile’s foreign minister has requested clarification of a passage in the Esteves Island Agreement, the document signed after the Peru-Bolivia bi-national cabinet held in Puno on Tuesday.

The summit in Puno aimed to find integrated solutions to environment, security, economic and infrastructure issues facing both countries. However one of the agreement’s 36 points implies that Peru supports Bolivia in its lawsuit against Chile claiming sovereign access to the Pacific Ocean, which is currently being considered by the International Court of Justice.

“The Republic of Peru maintains its widest spirit of solidarity and understanding in relation to the landlocked situation affecting Bolivia,” reads Point 32 in the Esteves Island Agreement. “In that context, the leaders reaffirmed the importance of the norms of international law and principles enshrined in the United Nations Charter, in particular the rejection of threats and the use of force, and the peaceful solutions to disputes.

“The President of Peru expressed his strong desire that a satisfactory solution can be reached to [Bolivia’s] landlocked status.”

Today Bachelet cancelled a meeting which was scheduled with Humala in Paracas ahead of the 10th annual Pacific Alliance summit in Ica next week. While Chile’s justice minister has stated the cancellation was due to a lack of time in the Chilean President’s agenda, sources at the foreign ministry told Chilean daily El Mercurio that Bachelet cancelled the meeting because of the the Esteves Island Agreement.

El Mercurio also reports that Chile’s foreign ministry is considering sending a letter of protest to Lima over the language in the statement. “The writing is not clear to us because there is a mention, a reference, to the use of force that we can’t understand. However it’s worth noting that [the statement] underscores the importance of international law,” Chilean foreign minister Heraldo Muñoz said.

Fernando Rojas, Peru’s ambassador to Chile, dismissed the idea that the passage was an intervention on the part of Peru. “There is no statement to be interpreted as us having an opinion on the process.”

This latest spat between Chile and Peru comes during a difficult diplomatic year between the neighbors and historic rivals. Two months ago, President Ollanta Humala accepted Chile’s formal apology after weeks of tension over an espionage case in which Chilean intelligence officials bought maritime information from members of Peru’s navy.

Last year Peru won an ICJ decision in a maritime border dispute, after which Peru gained over half of the 14,672 square miles of disputed fishing grounds. Both countries accepted the decision.

Leaders from the Pacific Alliance member states of Peru, Chile, Colombia and Mexico will meet July 1 through July 3 in Ica. The business-friendly political and economic bloc was created as a counterbalance to Hugo Chavez’s ALBA political bloc and Brazil’s Mercosur protectionist economic bloc, in both of which Bolivia is a member.