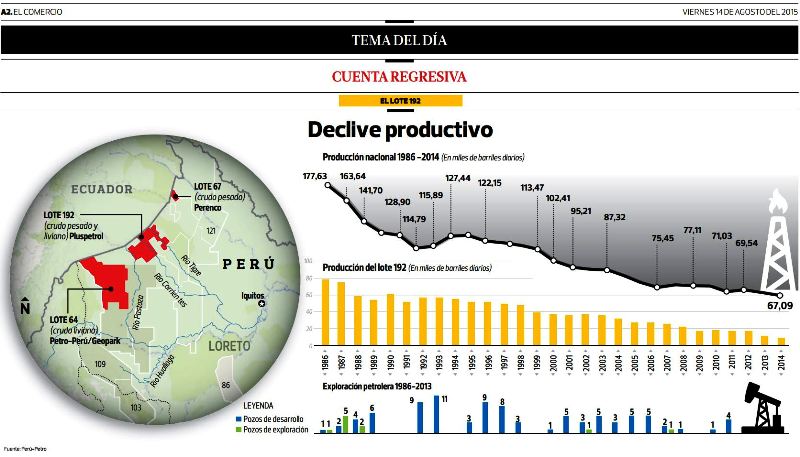 Peru’s government is negotiating directly with oil companies to operate block 192 to prevent a production shutdown at the end of this month.

An auction for the oil block hosted by national oil regulator Perupetro received no bids from three eligible oil companies. If the government cannot reach a new deal by the end of the contract in two weeks, the wells will be shut off.

“Peru-Petro really mismanaged this [auction],” said Carlos del Solar, former president of Peru’s National Society of Mining, Oil and Energy. “They started the block auction with the requirement that bidders must pay $346 million for the facility. And no one came forward. If Perupetro and the mining and energy ministry do not face reality, what can be done? All indications point to a low price of oil for a long time, but these guys do not understand.”

Potential bidders are worried about the Prior Consultation Law which requires obtaining consent from local indigenous communities before operating. The local tribes have shut down production with demonstrations in recent years and grown increasingly contentious with Pluspetrol, who they have rejected as an operator of the block.

However other experts say the greater deterrent for oil companies is the requirement to invest $346 million to buy the current installations and assume environmental liabilities.

Today reports surfaced that license negotiations failed with Anglo-French company Perenco. With Pacific Rubiales and Pluspetrol out of consideration, the only companies the government can turn to are small firms such as Colombia’s Omega.

On Tuesday over 10,000 demonstrators marched in Iquitos, the capital city of Loreto state which whose budget is funded by oil royalties, to demand that state oil firm Petroperu take over operations at block 192.

“We are not against investment. The indigenous communities and the people of Loreto want this oil license, the most important in the country, to be in the hands of Petroperu. We want a modern company which guarantees Peruvians’ energy sovereignty,” said Loreto governor Fernando Melendez. “Loreto supports a regional economy and a strategic national resource that should be in the hands of Peruvians, and the Loreto communities.”

Melendez added that shutting down block 192 would be “catastrophic” for Loreto, affecting over 6,000 workers and the local economy which serves them.

However President Ollanta Humala’s government has made clear that Petroperu does not have the financial resources to operate block 192 and complete the $3.5 billion upgrade to the Talara refinery. To obtain that funding, congress passed a law prohibiting the state oil firm from taking on more debt.