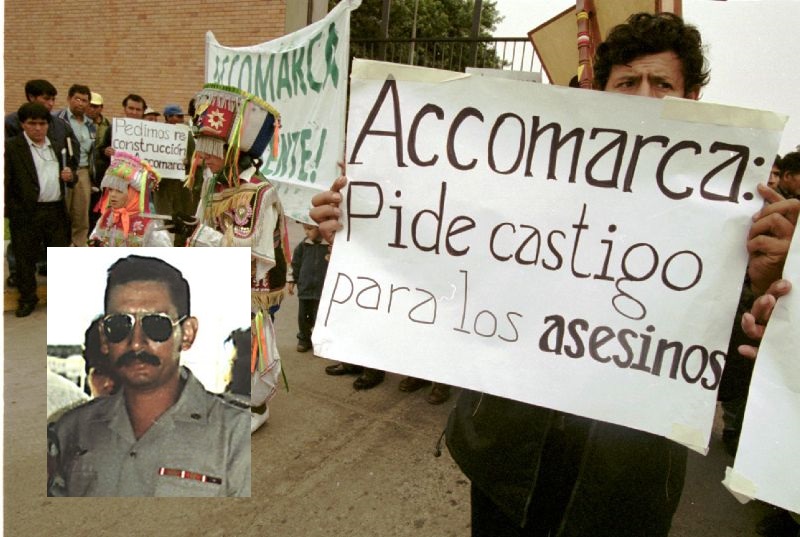 A court in Peru sentenced 16 former soldiers for the 1985 massacre of 69 people in Ayacucho during the armed conflict with the Shining Path.

The sentences ranging from 10 to 25 years come after a six-year trial more than 30 years after two military patrols massacred the residents of the Accomarca village in the Vilcas Huaman province of Ayacucho, the central mountain state home to the Shining Path insurgency.

The soldiers’ commanding officer Telmo Hurtado was sentenced to 23 years in prison and his superior, General Wilfredo Mori, received 25 years. Three lieutenants were sentenced to 24 to 25 years and 11 soldiers were sentenced to 10 years. Six others were acquitted, including General Jose Williams. The judgment also includes punitive damages of $44,000 for each of the victims’ families.

“After a nearly six-year trial, we were hoping for a fair sentence. For the first time, military leaders of the stature of General Mori have been convicted for being the masterminds,” Landa told El Comercio after the tribunal’s 15-hour deliberation. “Justice has been done after many years.”

On Aug. 14, 1985, two military patrols rounded up all the villagers and locked them into two houses. The soldiers opened fire on the houses with machine guns and then set them on fire. Of the 69 people killed, 23 were children.

However Telmo Hurtado, nicknamed the “Butcher of the Andes,” is the only convicted soldier currently in custody. All the others are fugitives with arrest warrants. Hurtado arrested in the United States in 2007 and extradited to Peru in 2011. He admitted to his role in the massacre in 2012.

“This was not an isolated incident from Telmo Hurtado, but the result of a systematic pattern,” said prosecutor Luis Landa. “There was a plan designed by the security forces in the area that was executed by these patrols. It is considered a crime against humanity.”

Peru’s Truth and Reconciliation Commission estimated the armed conflict with the Shining Path and Tupac Amaru Revolutionary Movement (MRTA) to have resulted in 69,000 deaths, most of whom were rural peasants who were not allied with the rebels or security forces.

“Thirteen years ago this was submitted and the government was not present. This apology is a request from the state …” justice minister Marisol Perez said at a ceremony marking the thirteenth anniversary of the Truth and Reconciliation Commission’s report. “Of course we must ask forgiveness. Forgive us for forgetting, the indifference and neglect.”

The Shining Path is a shell of what it was in the 1980s and 1990s. Isolated remnants now earn money for protecting drug traffickers in the VRAEM. Last year the United States designated the Shining Path a “drug kingpin,” which makes it a crime for those who provide legal services to the organization.