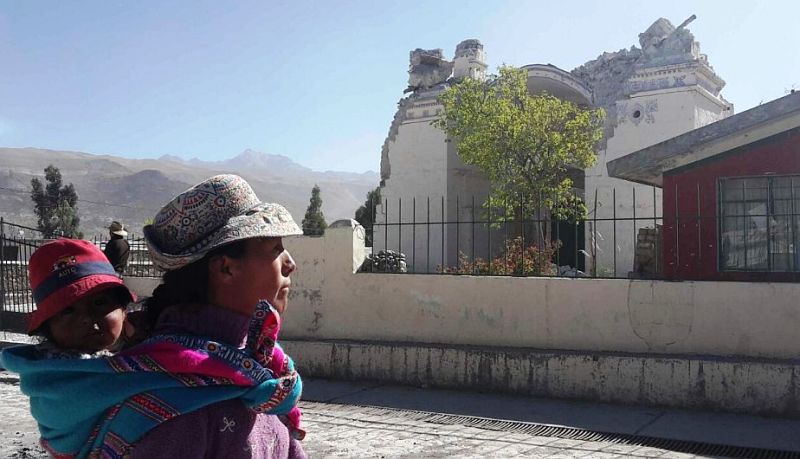 Peru scrambles to distribute aid in the wake of an earthquake which left thousands homeless and cut off access to a region dependent on tourism.

Peru’s government declared a state of emergency in the Chivay, Ichupampa, Achoma, Yanque, Maca, Madrigal and Coporaque districts in the southern state of Arequipa after the 5.3-magnitude earthquake rocked the Colca Valley last week, killing four people and injuring 68.

The focus since the earthquake has been on delivering aid to local residents, many of whom live in poverty in a region where winter temperatures can drop below freezing at night. According to a government report, more than 7,000 people were left homeless when 1,358 homes were rendered uninhabitable and 693 collapsed completely.

The defense ministry delivered seven tons of food, blankets and bedding by helicopter to the area, since the roads were closed due to landslides. Residents slept on sidewalks and in plazas as they waited for the government to build 500 installations for housing.

Arequipa’s picturesque Colca Canyon is Peru’s second-most visited tourist attraction after Machu Picchu. But tourism collapsed after the earthquake when access roads were closed. In most high seasons, the Colca Valley sees 1,100 daily tourists looking to glimpse the Andean condor or bathe in natural hot springs. Most roads were reopened on Thursday, four days after the quake, but daily visits has since peaked at just 420.

“The tourism market is very sensitive to emergencies,” regional tourism official Miguel Apaza told La Republica. “Tourists are changing their tickets from abroad, removing Arequipa as a destination, arriving in Lima and then to Cusco, but then going to Bolivia and Chile.”

Apaza added that the Caylloma province, home to some of Peru’s highest rates of poverty, will lose upwards of $3 million from the drop in tourism. The city of Arequipa has also suffered as tourists bypass the state completely.

Several historic churches in the area were damaged. Peru’s culture ministry will install an office in Caylloma’s provincial capital of Chivay to oversee construction and ensure the architectural character is maintained.

Arequipa governor Yamila Osorio also said that 90% of the area’s irrigation infrastructure was destroyed in the affected districts.