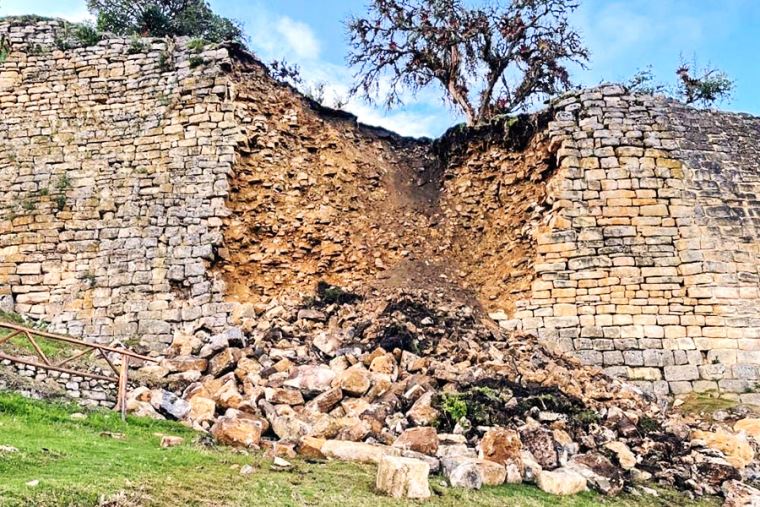 Damage to the Kuélap archeological site. Image courtesy of Ministry of Culture of Peru.

Peru’s Ministry of Culture temporarily closed the pre-Incan archaeological complex of Kuélap, located in the Amazonas department of northern Peru, after some of its walls collapsed on April 10 and 11.

Kuélap, one of the main tourist and cultural attractions in Peru, is located 1,162 kilometers north of Lima.

On April 10, the press reported that heavy rains caused landslides in some sectors of the fortress built by the Chachapoyas civilization, a culture even older than the Incan Empire.

The first collapse affected part of the wall that is 15 meters long, 12 meters high and five meters deep. The authorities had to fence off the area to avoid accidents, and the next day a specialized group from the Ministry of Culture arrived to analyze the magnitude of the damage.

On April 11, a second sector of the pre-Incan fortress collapsed, but the damage has not yet been assessed.

The Minister of Culture, Alejandro Salas, traveled to Kuélap on April 12, accompanied by a technical team, “to prioritize immediate actions” in favor of the preservation of the archaeological site, with the help of the regional and local government, according to an official statement.

After his arrival, Mr. Salas said that he would issue a decree to immediately attend to the emergency in the archaeological complex and restore it as soon as possible.

“We want to verify the area to draw conclusions, issue a report and propose a supreme decree to immediately attend to the emergency and restore Kuélap as soon as possible,” he told TVPerú.

The Ministry of Culture declared Kuélap in a state of emergency on February 11, with high precipitation and humidity levels threatening the stability of the ancient architecture. At that time, a series of actions were taken to try to protect the site and keep it open for tourism. 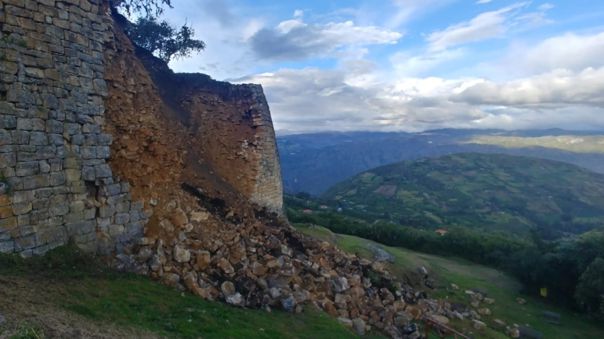 Why is this archaeological site important?

The archaeological complex of Kuélap –an ancient city similar to Machu Picchu– was built entirely with enormous stones between 900 and 1475 AD. It is the most prominent cultural heritage site of the Chachapoyas, a civilization in what is now northern Peru that was conquered by the Incas shortly before Spanish arrival in the region. This important pre-Inca civilization stood out mainly for its architecture, ceramics, textiles and metallurgy.

The Kuélap fortress has a circular architecture that covers approximately 600 meters in length and is surrounded by a wall that in some sections reaches 20 meters high.

Inside the fortress, the Chachapoyas organized themselves to carry out various activities.

There are buildings intended for administrative work, others served as residences and others for religious and ceremonial activities.

One of the attractive features of Kuélap is that it was built on top of the Barreta mountain, in the upper part of the Utcubamba river valley, at 3,000 meters above sea level. Its elevation provides for beautiful vistas for tourists.

In 2021, the Ministry of Foreign Trade and Tourism awarded Kuélap the international “Safe Travels” seal that certifies it as a biosafe destination for tourism.

5 places to visit in Ollantaytambo, Peru, the monumental Incan fortress on the way to Machu Picchu

Holy Week in Ayacucho: The largest religious festival in Peru returns after 2 years of lockdown