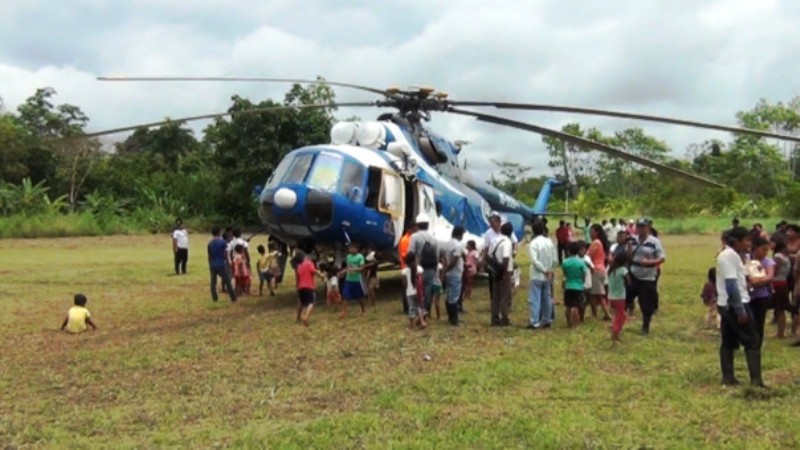 An indigenous tribe in Peru’s Amazon jungle have released eight hostages and a military helicopter after national government agreed to include them as recipients of cleanup aid.

On Sunday members of the Mayuriaga community in the Datem del Marañon province of Loreto state detained a military helicopter and government officials to protest their exclusion from an aid package to clean up the areas affected by oil spills from state oil company Petroperu’s Northern Peruvian Pipeline. The Wampis tribe in Mayuriaga detained eight officials from Petroperu, Peru’s environmental protection agency OEFA, the mining and energy ministry and the military.

“We want to see reparations, and the Petroperu president to come and reach an agreement,” a Wampis leader told El Comercio.

On Monday Petroperu president German Velasquez, Loreto governor Fernando Melendez and other government officials traveled to Datem del Marañon to meet with the tribal leaders. The officials agreed to include the Mayuriaga community in an emergency aid plan which had already been extended to 16 other indigenous communities in the Loreto and Amazonas provinces.

The Mayuriaga leaders released the hostages and helicopter after signing the agreement on Tuesday.

Two breaches in the Northern Peruvian Pipeline this year leaked 1,000 barrels of oil into the Datem del Marañon province as well as 2,000 barrels in the Bagua province of Amazonas. State oil company Petroperu was already fined $3.6 million by Peru’s mining and energy authority and faces up to $15 million more from OEFA.

Taking hostages is a common tactic in Peru’s jungle and rural highlands to demand action from the government. In September 40 tourists were detained in Madre de Dios to demand the construction of a road in the Manu National Park.