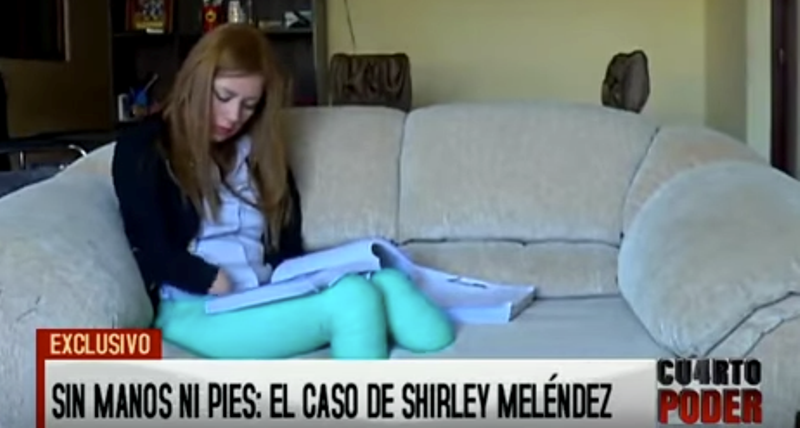 A woman who went into a Lima hospital to have kidney stones removed has had her hands and feet amputated after alleged malpractice.

Shirley Melendez, a 25-year-old counselor at Peru’s student financial aid agency, first went to the Guillermo Almenara public hospital in La Victoria in January to be treated for kidney stones.

She was discharged after three operations between January and March, only to return 10 days later when she could not urinate. She was taken into emergency care and given a catheter before fainting. Doctors induced her into a coma and gave her a tracheotomy, but the following day she suffered a cardiac arrest.

“I went in because I was worried I could not urinate. I did not think there would be a risk of death,” Melendez told Cuarto Poder.

Melendez claims she has a recording which suggests that her doctor used an infected catheter. He has denied the claim. The case has horrified the country and drawn scrutiny on Peru’s public healthcare system, EsSalud.

“Shirley demonstrates an issue that needs correcting with EsSalud. We must become aware of the impact this has on a young and dynamic woman like her,” labor minister Alfonso Grados told La Republica.

On Tuesday President Pedro Pablo Kuczynski weighed in on the issue in a video posted to his Facebook account.

“It is absolutely scandalous that we have this kind of medical treatments. There have been cases of people who had the wrong leg amputated,” Kuczynski said. “We are working very hard so that this type of thing never happens again in our country.”

“Shirley, I promise that the state will give you everything today.”

EsSalud director Virginia Baffigo has said that the case is under investigation.

Melendez’s is at least the second case in which a patient entered the EsSalud system with one condition and left with their hands and feet amputated. In 2014 Kelly Sayhua underwent an appendicitis at the Sabogal hospital in Callao which resulted in an infection that led to her losing her hands and feet.