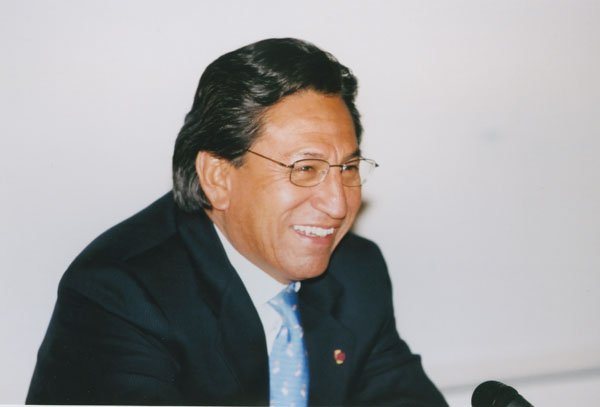 While former president Alejandro Toledo walks around as a free man in the United States, Peruvian prosecutors say they would like to get him back to the country to face trial over a 2017 corruption charge. The charge stems from accusations that the man who was Peru’s president from 2001 to 2006 took bribes from the maligned Brazilian engineering conglomerate Odebrecht, which has already been tied to several notable Peruvian politicians, including former presidents Ollanta Humala and Pedro Pablo Kuczynski.

Peru’s Foreign Ministry confirmed with a Friday Tweet that it requested Toledo’s extradition from the U.S. State Department that morning.

Prosecutors have said that Toledo is believed to have taken up to $20 million in bribes from the Brazilian firm.

According to the Associated Press, authorities from the country say that Toledo has been seen in New York and San Francisco. He is thought to be living full-time in California.

This February, a Peruvian judge said he requested permission from the United States to adhere to the international arrest warrant and send Toledo back to his home country for potential prosecution.

In 2017, Peruvian prosecutors said their investigations showed millions of dollars laundered from a British bank account to Toledo that is believed to have come from Odebrecht officials. From our article in February of that year:

According to Castro, Odebrecht executives cooperating with Peruvian investigators since reaching a deal with the United States Justice Department revealed that they had paid $20 million in bribes to Toledo via Maiman’s bank account in London. In exchange for the bribe, Toledo’s government allegedly helped Odebrecht win $600 million in contracts to build two sections of the Interoceanic Highway which connects Peru to Brazil. The contracts were later increased to over $1.3 billion.

Authorities seized Toledo’s properties, like his $4 million Lima home, in July of 2016.

Prosecutors have said in the past they are confident they could successfully order preventive prison against Toledo while the case against him builds. Humala was just recently let out of “preventiva” with his wife on similar charges circulating around Odebrecht bribes, but then had five of his properties confiscated by prosecutors.