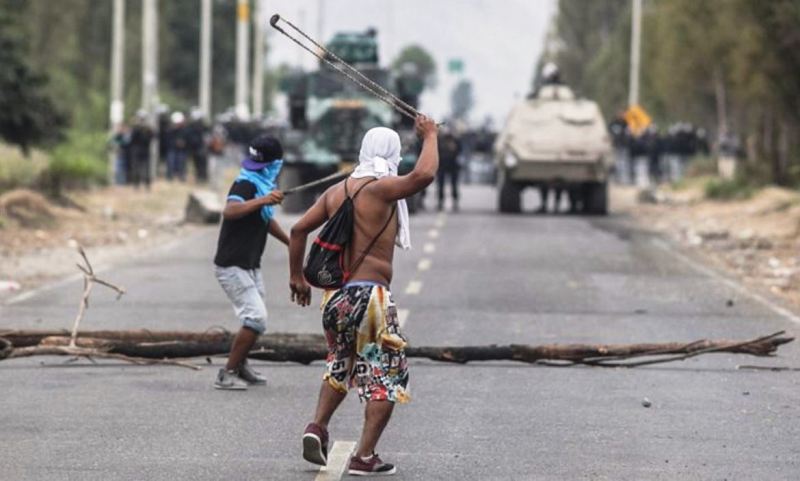 The willingness and perceived legitimacy to use violence against the state is Peru’s cultural challenge of the generation.

El Comercio’s editorial today titled “Made in Peru” highlights the increasingly common use of violence in protests throughout Peru. The article comes one week after a protester was killed in clashes between villagers and police near the Parcoy gold mine in La Libertad.

“Criminal actions such as kidnapping civil servants or blocking roads have become the most effective route, ironically, to ‘hold dialog’ with the state and demand concessions. Even when the reasons for protest are legitimate, recourse to violence should never be tolerated as an instrument of negotiation,” the article says.

“The impunity of those who deliberately commit crimes covered in a false illusion of ‘protest legitimacy’ should not go unnoticed. Civil society, media, the state and political leaders of all stripes should unite to denounce these acts and not let violence in any of its forms become the hallmark of our country.”

See all news for protests in Peru.

The editorial cites three current conflicts with the potential to amount to violence in the Constancia copper mine and Utunsa gold-and-silver mine in Cusco, as well as a region home to oil spills in the Amazon jungle. The most visible conflicts involve mining and energy projects and their effect on local populations, as seen with Conga in Cajamarca, Tia Maria in Arequipa and Las Bambas in Apurimac.

But violent resistance is not confined to environmental concerns. A man was killed in Junin last year in protests which effectively demanded the relaxing of environmental standards to avoid the closing of the La Oroya smelter.

The city of Iquitos was paralyzed by violent protests led by regional officials and union leaders who demanded the region’s largest oil license be granted to state oil firm Petroperu, as opposed to a private company. Ironically, Petroperu was later faulted for the greatest environmental damage in the country via various pipeline leaks.

The use of violence is not confined to environmental concerns or even mining and energy projects. In April two police officers were critically injured in Huancavelica when a community protested to demand the opening of a local university. Dozens were injured in February when mobs rejected a reform to the bus network which would serve Lima’s suburbs.

The willingness to use violence to demand one policy over another in what are sometimes trivial concerns has partly made Peru an ungovernable place.

One of President Pedro Pablo Kuczynski’s greatest challenges is resolving social conflicts in order to execute extractive projects worth billions of dollars in investment. His plan seems to amount to talking to communities and showering them with financial benefits before the project starts.

That might help, but the problem is bigger than Kuczynski. It won’t be solved in five years because it’s a cultural issue. You can’t expect one man to counter the prevailing wisdom that it’s perfectly fine to throw rocks at police or kidnap dozens of people at a time when things don’t go your way, especially when groups have done exactly that with impunity for years.

Not all the blame rests with protesters. Many live in remote areas which receive nothing from the state in social services, infrastructure or security. Responsiveness to their concerns moves at a glacial pace if at all, unless in fact they “radicalize.”

So in addition to requiring a cultural campaign for the public to respect concepts like eminent domain and the rule of law, the national and regional governments need to improve efficiency and honest administration.

The organic democracy in the United States came after the gradual adoption of employing compromise to solve societal problems. Democracy in Latin America was largely inspired by external circumstances, and the failure to compromise has marked the region’s chaotic trajectory. Figuring out how to teach that idea is Peru’s greatest politico-socio-economic challenge.