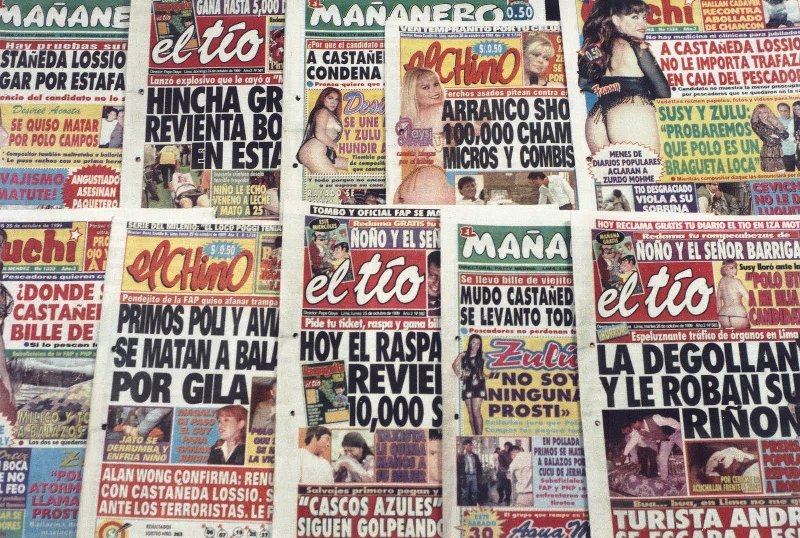 The story started when it was reported that the DEA was investigating Popular Force chairman Joaquin Ramirez for money laundering in connection with an alleged drug trafficker. In an effort to discredit the report, Fujimori’s running mate Jose Chlimper sent Panamericana Television an edited audio recording which aimed to discredit a key witness from the report.

While Peruvians are also worried about the risk of becoming a narco-state, the media scandal struck a chord of unease in the pit of their stomachs. Co-opting the media and character assassination were textbook tactics of former President Alberto Fujimori.

Alberto Fujimori diverted money from the military to the “chicha press,” or Peru’s tabloids, to run blatantly false headlines against his political opponents, specifically Lima mayor Alberto Andrade and a young presidential candidate in Alejandro Toledo. Fujimori was recently found guilty of misappropriating money in the scandal.

The anti-Fujimori protests which brought tens of thousands to the streets of downtown Lima again on Tuesday is driven not only by anger over extrajudicial killings or the theft of $100 million from Peru by Fujimori. The anti-Fujimoristas also believe a grave loss of respect for the law and society took hold in Peruvian culture during Fujimori’s government.

“[Those who are against Keiko Fujimori believe] a Popular Force government is an unacceptable return to the past, that the presence of the daughter of Alberto Fujimori in the Government Palace is an insult for a country that saw its judicial authorities, military, congressmen, journalists and businessmen sitting in the [SIN intelligence agency] living room to receive mountains of money in exchange for becoming accomplices in abuse of power, theft, lies and arrogance,” writes Patricia del Rio in El Comercio.

Certainly they are angry at the dictator for the measurable, quantitative crimes like embezzlement and murder, but they also fear a Keiko Fujimori government would commit the qualitative crimes of degrading the quality of discourse and respect for government in the hearts and minds of the public.

They see that lack of respect for the public and fair play in Chlimper’s audio. It reminded them of 1990s Fujimorismo. In addition to utter incompetence, the “Chlimper audio” episode was an exercise in fraudulent character assassination against a private citizen.

Chlimper had the audacity to claim he didn’t listen to the audio before passing it to the media, implying that Panamericana may have edited the recording. It’s a scenario so unimaginable it’s insulting to our intelligence.

If you are going to defraud the public, at least do a good job. But the recording was so obviously doctored that it was dismissed within 24 hours. Then the icing on the cake was that it came not from some no-name peon but the man who may be second in line to the presidency if Fujimori is elected.

At the second debate, Keiko Fujimori herself said with a straight face that Chlimper disseminated the audio in a “transparent” way. She deduced that equally absurd angle given the paper trail from the audio to Chlimper was so obvious. It couldn’t have been intentional because it was so poorly carried out.

But Fujimori’s “transparent” argument is even more insulting than Chlimper’s claim that he never listened to the audio because he never came forward. It was not until five days after the original broadcast when a Panamericana reporter resigned and told El Comercio that Chlimper was the source. Unfortunately, it was both fraudulent and completely incompetent at the same time.

Fujimori goes past insulting our intelligence with an obviously doctored audio by asking us to swallow an even more cynical explanation that it didn’t come from Popular Force.

Some observers here and abroad hold out hope that the Chlimper-audio affair is not a preview of what’s to come in a Fujimori government, but an anomaly given the pressure during final days of a presidential campaign. Especially in the wake of the curiously timed report on Joaquin Ramirez.

“The main reason for believing that [Fujimori’s] victory, assuming it happens, would not entail political regression is not just that she is not her father,” according to The Economist. “Peruvian democracy is stronger than it was in the 1990s, and both the media and civil society are less biddable than they were. But Peruvians will need to be alert.”

Not everybody is so optimistic.

“‘That happened 15 years ago’, ‘Our society will not allow a new dictatorship’ and ‘The press is more mature and independent’ are the kind of arguments I am hearing,” Andres Calderon writes in El Comercio.

“This story unfortunately demonstrates flagrant immaturity in our journalism, which does not choose its sources well, does not treat political sources with skepticism or contrast evidence … [A journalism] which cannot screen programs or journalists … and which, intentionally or not, lends itself to the worst political games.”

“In other words, despite our self-indulgence and how highly we would like to regard Fujimorismo and ourselves, the sad prognosis seems to be that we are not yet prepared.”

Fujimori versus anti-Fujimorismo (The Economist)