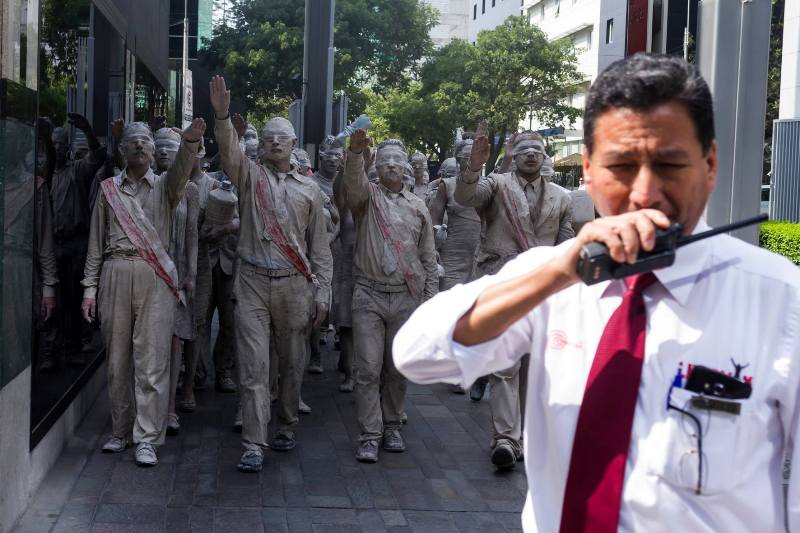 Art collectives and other activist groups in Peru have long been pioneers in developing innovative forms of protest featuring creative symbolism.

“It was about the value and importance and fundamental right to water. The city was without water for five days. Our idea was to make clear that people are dying because of their actions all over Peru,” one protester told me.

“The purpose was to create awareness of who were really responsible. The difference between a natural disaster and phenomenon is the government,” said Rastro organizer Julia Garcia.

“Why were there no preventative measures in place? There are a lot of companies which take money under the table and do a bad job, it’s all corruption. We ironically dressed in upper-class clothing to show that actually it’s not the upper class who suffer. People in San Isidro affect what happens in this country. They live in the middle of Lima so we’re not even close to being affected, but we’re responsible.”

This creative form of protest is spreading. To commemorate 25 years since former President Alberto Fujimori’s dissolving Congress in 1992, hundreds of activists left their empty shoes outside the Palace of Justice with signs saying “25 years without ______,” to symbolize over 3,000 missing people who disappeared under the regime. Locals filled the blanks with words such as “democracy,” “opportunity” and “my sons.”

January saw violent protests against a new toll fare in a northern Lima district where locals took to the streets and fought authorities for three days. But at the same time, a group of activists disguised as workers for Lima’s Metropolitano handed out fake coupons for a week of free travel along the bus rapid-transit line. The coupons featured a fake apology from Lima mayor Luis Castañeda and a list of his alleged crimes. The rush-hour public, if initially miffed by the situation, took to social media in outrage against the charge sheet.

In this style of confronting government, what makes Peru stand separate?

“If we go back through Peruvian history folkloric expression, this has become a part of our protest process. We also have a history with people who cannot read or write. Therefore we have grown used to using our bodies to create a political narrative. If you go to the jungle you see how ritualistic it is, fighting, dance for war, for whatever reason. So we have a tradition of carnivals and characters to give imagery. We still use the body or symbols to show a narrative,” said Garcia.

“In seeking to redefine the exercise of social power, performances allow us to observe the possibilities of agency of subjects and space gaps that hegemony has not yet been able to conquer,” Victor Vich says in his book, “Symbolic Disobedience: Performance, Participation, and Politics at the End of the Fujimori Dictatorship.”

In 1996 Fujimori passed a law offering amnesty to military personnel implicated in violation of human rights. The artist community reacted with anti-government sentiment but found momentum when celebrated sculptor Victor Delphin led a march which gave birth to the “Every Blood, Every Arts” movement.

This symbolic unification against Fujimori’s tyrannical government enabled once uncooperative political activists to recognize shared injustices which inspired a wave of national civil disobedience.  According to Vich the “discourse of culture replaced political discourse” giving rise to the Civil Society Collective.

One of the movement’s first acts followed Fujimori’s controversial reelection in 2000. A constitutional amendment in 1993 prohibited presidents from running for a third term. But his supporters successfully argued his first term, before the law was passed, was exempt. After his reelection, black-clothed protesters marched on the Palace of Justice bearing crucifixes and carrying a coffin to perform the symbolic burial of the government.

In June of the same year the largest protest in Peruvian history took place in the March of the Four Corners. Over 250,000 Peruvians took to the streets, among them future President Alejandro Toledo, and violence resulted in widespread damages, the blocking of whole city sections and a wing of the Palace of Justice being torched.

One of the strongest symbols to emerge that year was “flag washing.” Every Friday for over a year, activists convened in front of the Palace of Justice to wash Peruvian flags in response to rampant corruption, symbolizing the need to clean up of the country. It spread to towns across the provinces and to over 20 Peruvian communities abroad. This evolved into the washing of military uniforms, judges garbs and even a Vatican flag outside the Lima cathedral.

When video surfaced which showed Fujimroi’s intelligence chief, Vladimiro Montesinos, bribing opposition congressman and media moguls, art collectives responded with “Put the trash in the trash,” taking to the streets with 300,000 trash bags featuring images of Montesinos and Fujimori imprisoned.

Fujimori fled Peru into self imposed exile in Japan where he faxed in his resignation. Within hours, Valentin Paniagua was elected interim president and tasked with organizing elections. Collectives continued to wash flags throughout Fujimori’s downfall outside the Government Palace. In a historic moment emblazoning the determination of civil dissent, Paniagua joined them in washing the final flag, a symbol of political victory. Peru’s democracy had been recovered.