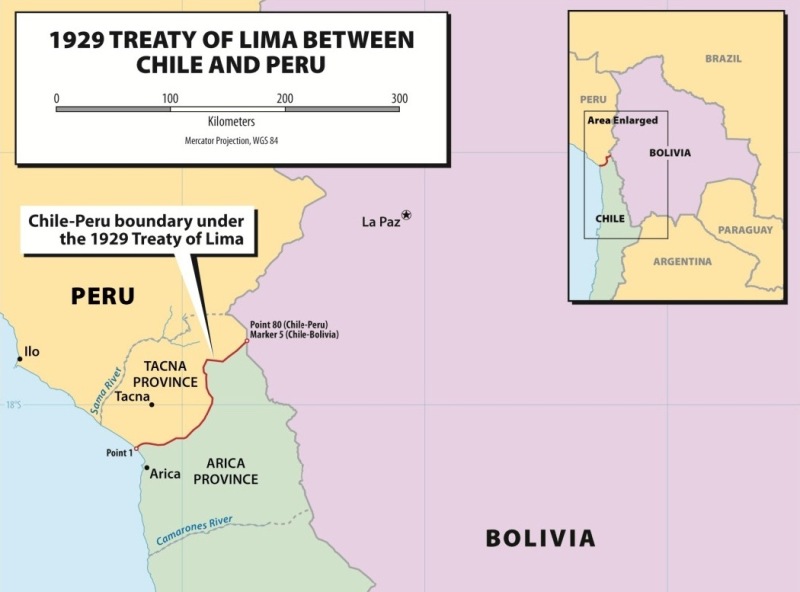 While the International Court of Justice deliberates the lawsuit Bolivia brought against Chile in an effort to gain sovereign access to the Pacific Ocean, Peru sent an explanatory note to The Hague this week to clarify its border with Chile.

Evidence submitted by Chile and made public two weeks ago surprised President Ollanta Humala‘s government as well as opposition politicians with its use of the term “Point 1” instead of “Punto Concordia,” as stated in the 1929 Treaty of Lima.

Cynics would conclude that Chile is attempting to blur the border or make it ambiguous enough to bypass a Peruvian veto if it wanted to cede Arica to Bolivia in the event of a Hague decision in that country’s favor. Peruvian officials stopped short of speculating about its southern neighbor’s intentions in the name change despite recently tense relations over Chilean espionage against Peru.

And while bypassing the Treaty of Lima is unlikely, what does Peru have at stake in the current dispute between its two southern neighbors? Aside from a new maritime neighbor in already contentious relations over rich fishing waters, the key to the case is maritime transport of Bolivia’s natural resources.

Public hearings began this month with Bolivia arguing its claims of contractual injustice and Chile defending its current borders. Bolivia brought the case to The Hague in April 2013, but its origins go back to the 1904 Treaty of Peace and Friendship. The treaty was signed 20 years after hostilities ended in the War of the Pacific, in which both Peru and Bolivia lost territory to Chile, including Bolivia’s access to the sea.

The 1904 treaty would not go uncontested for long. In 1920, the Bolivian government made its claim for the disputed provinces of Tanca and Arica before the League of Nations. The motion was dismissed. Bolivia would bring the issue up again in 1950, and once more in 1975 after diplomatic ties were temporarily restored between the two countries. Chile’s Augusto Pinochet proposed to cede land to Bolivia in exchange for an equally sized parcel of land elsewhere. Bolivia refused the proposal. If you thought Peru-Chile relations were difficult, Bolivia and Chile have not had ambassadors for sixty years.

The war was initially fought over deposits of saltpeter deposits, which were used as fertilizer in the late 19th century. To add insult to injury, significant copper deposits which help make it the world’s top cop producer were discovered in the territory it gained from Bolivia. Now Bolivia’s focus is on sending its natural gas west.

The Bolivian government claims that the 1904 treaty grants it sovereign access to the sea, and that Chile is unnecessarily restrictive in Bolivian use of Chilean ports. Chile counters that Bolivia is allowed autonomous customs officials at Chilean ports, preferential tariffs and tax exemption for Bolivian cargo in accordance with the treaty. Both countries’ citizens can cross the Bolivia-Chile border without a passport.

Northern Chile is one of the most important conduits for Bolivian trade. Zinc and lead from the San Cristobal and Potosi mines in Bolivia’s southwest travel across road and rail to reach the Chilean ports of Antofagasta, Arica and Iquique. From there they are exported to Asia and the United States. Arica also serves as a key entry point for consumer goods destined for Bolivia such as Japanese cars and Chinese manufactured goods. Arica has warehouses dedicated specifically for Bolivian imports.

Natural gas, which accounts for 45 percent of Bolivia’s outgoing trade, travels from the southern fields of Tarija via pipeline to Brazil and Argentina. Bolivian natural gas would find good use in the energy-intensive Chilean copper mines just across its border, but Bolivia prohibits its sale westward due to the century-old border dispute. While metals make up the bulk of Bolivia’s westward exports, Bolivia’s top export is only shipped east.

As relations between Bolivia and Chile become more contentious, Bolivia may look to Peru for access to the Pacific in the event the court rules for Chile. In the 1990s, Peru granted Bolivia land for a duty-free port and industrial park at the southern port of Ilo. The port is 285 miles west of La Paz, about the same distance from the Bolivian capital as Arica.

However, Ilo has yet to become a significant conduit for Bolivian trade. Roads from La Paz to Ilo are not maintained as well as the roads to Chilean ports. Bolivia cannot ship via Peru’s railroads because the countries use different track gauges. While Peru’s railways were built using the more widespread standard gauge, Bolivia uses the metre gauge of Brazil, Argentina and northern Chile. Bolivia’s dreams of rail were dashed completely when plans for a Chinese-financed railroad linking Ilo to Brazil’s Atlantic port of Santos through Bolivia’s northern city of Cobija were changed last year to bypass Bolivia entirely.

While its natural gas is not allowed to enter Chilean territory, Bolivia surely has ambition to send its most valuable export west. Peru’s Southern Gas Pipeline, currently under construction, will connect gas deposits in the interior jungles of Peru to Ilo. The multi-billion dollar project is due for completion in late 2017. Bolivia hopes to link its natural gas to the pipeline, circumventing Chile in the process.

If Bolivia does not win sovereign access to what is now the Chilean coast, Peru’s pipeline would be its only way to competitively offer natural gas to Asia and the Western ports of the Americas in important markets like California and Mexico. This would effectively give Peru control of Bolivia’s westbound natural gas, something Chile would have enjoyed for all these years if Bolivia were willing to work with its neighbor.

Peru recently won a border dispute in the International Court of Justice in which it expanded its maritime boundary at Chile’s expense, emboldening Bolivia in its own claim. Even if Chile should succumb to international pressure and cede part of Arica, it could only do so with the consent of Peru.

According to strict game theory, Peru should veto any Chilean transfer of Arica. Peru’s economic interests are best served by controlling Bolivia’s westbound exports of natural gas. Of course, international relations and geopolitics are not conducted according to strict game theory. Such moves are usually dressed up in smiles or populist propaganda while pursuing national interests. Would Peru veto the transfer of Arica? Game theory says it should. We will have to await The Hague’s ruling.

Bolivia’s populist President Evo Morales brought the current case to the international court as he was seeking court approval at home to run for a third term. But if Morales’ initial intention in reviving Bolivia’s claim was to gather support for a third term, it looks like his popularity might be waning. His Movement to Socialism party recently lost to opposition candidates in mayoral and gubernatorial elections throughout Bolivia. And his government’s case for a coastline looks like a long shot.

Bolivia recently unleashed a secret weapon in its century-long dispute with Chile over access to the Pacific Ocean in Claudia Taval, Miss Universe Bolivia 2014. She and over 30 other stars were commissioned by the Bolivian government to sing “Beaches of the Future” in an attempt to gather popular support for its latest push to get a coastline. Miss Universe Bolivia may not be enough to boost the appeal of Morales and MAS. As of this writing “Beaches of the Future” has less than 6,000 views on YouTube.

Beaches of the future? (The Economist)

Voters rebuke Evo Morales and the ruling party (The Economist)

Port container traffic in Latin America and the Caribbean 2011 (CEPAL)

Port of Ilo, Peru: New Output of Exports from Bolivia and Paraguay (Latin American Association of Ports and Terminals)