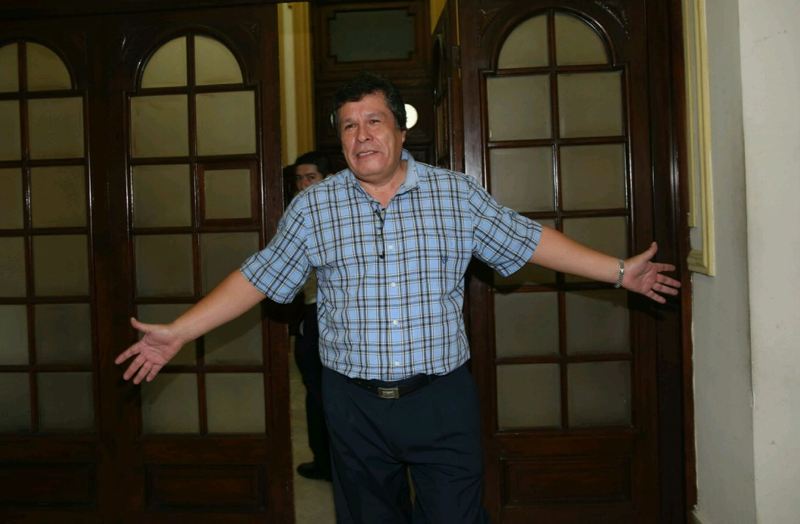 The vote to expel congressman Alejandro Yovera, which the opposition has demanded before debating presidential decree powers, was delayed by the appearance of a suspended congressman.

On a day when he had completed just over one month of his suspension, Benitez walked into the congressional chamber and, smiling, waved for photographers’ cameras. Benitez told reporters that he believed his suspension ended yesterday. Members of the opposition parties walked out of the chamber and congressional president Ana Maria Solorzano suspended the hearing for 15 minutes.

Both sides of the debate to expel Huanuco congressman Alejandro Yovera, who is currently serving his second suspension from congress and faces a suspended prison sentence, blamed the other for the interruption.

The government’s ruling Nationalist Party claimed that the opposition does not want to resolve Yovera’s situation because they do not want to vote on limited decree powers for President Ollanta Humala’s government to pass laws to address the economy and crime without being debated in congress.

The opposition parties claim that the Nationalist Party does not want to lose a key vote in Yovera, who has voted in line with the government since leaving the Fujimorista coalition after his first congressional suspension.

After an hour, Benitez left the chamber and the expulsion debate resumed. Yovera was unanimously expelled from congress and is now ineligible to hold office for the two years of his suspended criminal sentence. Yovera’s seat will be taken by Popular Strength congresswoman Karina Beteta, who was formerly a member of the rival Nationalist Party.

Last Thursday the Fujimorista and APRA coalitions walked out of congress, breaking quorum, when speaker Ana Maria Solorzano denied a vote to expel Alejandro Yovera. The parties extended their boycott to Friday, when prime minister Pedro Cateriano was scheduled to make the government’s case for decree powers.

Over the weekend the Nationalist Party agreed to debate Yovera’s future in order to proceed with the debate on limited powers for Humala’s government which, as one of the least popular in Latin America, will continue its term as a lame duck without the ability to rule by decree.