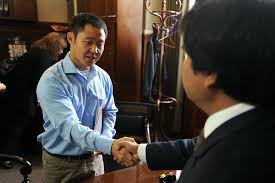 The book of Matthew says that a house divided cannot stand. The House of Fujimori today stands more divided than ever and the palace intrigue continues to grip Peruvian politics amid claims of corruption and political machinations.

The wedge being driven between the two Fujimoris, sister Keiko who leads the opposition party and brother Kenji who leads a faction within the party, now threatens to displace Fuerza Popular even further as scandal and allegations of  backdoor deals swirl within political circles in Peru.

The gap has now widened between Peruvian’s views of Kenji over Keiko in public polls published recently by Ipsos. Although the overwhelming majority still disapprove of both siblings, Kenji now has the support of 38% of the electorate whereas older sister Keiko only has 30%. His popularity is even more marked in Lima where he enjoys nearly half the city’s residents approval of his conduct. In November, Keiko led approval ratings over her brother and the newest polls reflect how far she has fallen in the eyes of the public. In addition to this, Keiko also commands the absolute loyalty of at least 9 of his peers. The congressmen and women who abstained to vote against President Pedro Pablo Kuczynski (PPK) have already pledged allegiance to Kenji, stating that if the younger Fujimori is ousted, then they too shall leave with him, Andina reported.

It can be argued that placing too much importance on polls of this kind is fruitless political analysis. However, they can be seen as a wider indication that Keiko’s actions over the past year, including being implicated as part of the broad-reaching Oderbrecht scandal, have fallen out of favour in Peru.

In addition to this, the Ipsos poll also revealed public attitudes to the pardoning of Alberto Fujimori, which was granted by PPK in December last year. Many in the media saw the decision to persuade 9 congressmen to abstain as a pact in exchange for a pardon of Kenji’s father.

3 days after the turbulent events of the impeachment vote and protests rocked Lima after PPK issued a pardon of former President Alberto Fujimori on medical grounds. The poll shows that the public agree with the allegations of political impropriety with only 15% believing that the decision to pardon the elder Fujimori was purely on humanitarian grounds. However, despite the gravity and extent of the crimes perpetrated during Alberto Fujimori’s regime, the poll also found that 53% of Peruvians favoured the medical pardon (as opposed to the 43% that opposed PPK’s decision.)

The icy relations between brother and sister have been fodder for a nation gripped by the Oderbrecht scandal. It has, for example, been reported that the two do not even visit their father at the same time at the Lima hospital where the elder Fujimori is being treated. The House of Fujimori stands for today even if, as polls suggest, the nation is divided.