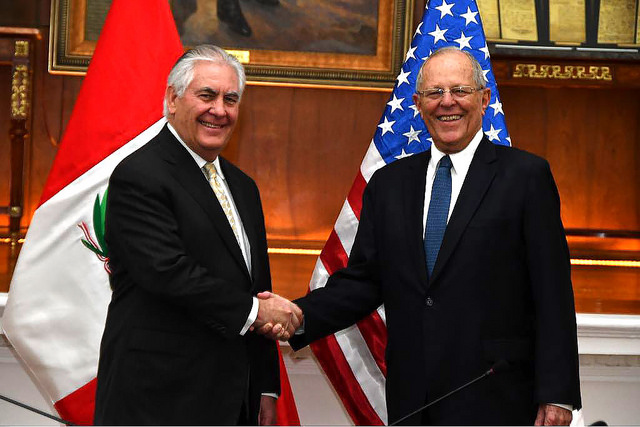 The last time Rex Tillerson was in Peru was 48 years ago. He was 18 at the time and an undergraduate student playing the drums for his university band. At a press conference standing alongside Peruvian Foreign Minister Cayetana Aljovín, Tillerson recounted how his freshman journey to Peru coincided with two major events in the Andean region; the 1971 earthquake and the football glory the Peruvian national team bathed in when they made the quarterfinals at the 1970 World Cup.

Nearly 50 years later, the tremors are closer to home for Secretary of State Tillerson. He arrived in Lima as the world’s most powerful diplomat for the fourth leg of his Latin American tour, and yet many of his attempts at diplomacy have been surveying the damage and building from the rubble that his boss routinely brings about.

A tour by Tillerson has followed a general pattern since he assumed the role of Secretary of State in February last year:

Rinse and repeat. Peru was no different. Prior to his trip, Trump threatened to cut funding to nations that produced and exported illicit drugs, saying at the Customs and Border Protection National Training Center in Virginia that “We think they’re our friends, and we send them massive aid, and I won’t mention names right now…But I look at these countries, I look at the numbers we send them, we send them massive aid and they’re pouring drugs into our country and they’re laughing at us.”

Trump mentioned names. Four of them: Mexico, El Salvador, Honduras and Guatemala. Despite Peru not being named, however, it was implied that the country that is one of the top two exporters of cocaine in the world was going to be in the firing line for foreign aid. Peru received $96M in foreign aid in 2016, much of it distributed by the US Agency for International Development and the Department of Defence. Aid to Peru had been on the rise during the second term of the Obama presidency culminating in a high of $350M in 2015.

So the first question from the media Tillerson received at the conference was unsurprisingly about Trump’s comments and the fine balancing act began. To Tillerson’s great credit his southern drawl and deadpan delivery betrayed little of the sentiments he is reported to have had about his boss. His response: ‘The U.S. is victimized certainly by the flow of narcotics to the U.S. But the countries in which these narcotics are transiting or where organizations are carrying out their activities to move these drugs, they also suffer as well from violence in their neighborhoods, violence in their cities and towns, and it has its own effect on their nations.

“I think one of the things we’ve been very clear in the joint dialogue we’ve had with Mexico, for instance, is the U.S. has to acknowledge that we are the market, and we are the largest consumer of illicit drugs, and so we have to begin to work on that problem.”

In response to a similar question, Foreign Minister Aljovín said, “The Secretary of State acknowledged the efforts made by Peru in the fight against drug trafficking, the increased budget that Peru passed to be able to fight this scourge, and we agreed that we have to continue working together in this fight. We also agreed that sometimes drug traffickers work with terrorists, joint forces to carry out these terrorist attacks. And we agreed in how important it is for both of us to work together so that this scourge is eradicated and is something that adversely affects our region. [Translation by US State Department]

In addition to deflecting attention from the President’s comments on other countries, Tillerson often has to find a way to reconcile the President’s views with his own. A former chief at Exxon, Tillerson’s views were always seen as globalist, as evidenced by his affirmative stance on the TransPacific Partnership (TPP); an agreement that Trump scrapped in his first week in office. In Peru, Tillerson spoke of the Peru Trade Promotion Agreement (PTPA) as being a crucial document in US-Peru relations despite Trump’s inflammatory rhetoric towards other similar free trade agreements like TPP or NAFTA-the equivalent agreement that the US has with Mexico.

Much of the coverage of Tillerson’s Peru trip was around Trump’s comments or the renewed commitment to fight the flow of drugs. This is expected to be a common topic on the Colombian leg of his journey as well, as he touches down in Bogotá on Wednesday.

Tillerson’s praise for Peru in meeting the standards of joining the Organisation for Economic Co-operation and Development (OECD), and the countries’ agreements on international concerns like North Korea and Venezuela, were smaller footnotes. The two politicians also spoke of the Summit of the Americas which will be held in Lima this year where the matter for discussion will be ‘Democratic Governance against Corruption’. Being a prominent member in a cabinet embattled against allegations of corruption and a criminal impeachment process for its leader PPK, it was Aljov´n’s turn to be deadpan as she said, “We agree that the results of this summit should be to aim for concrete results and not just a declaration.”