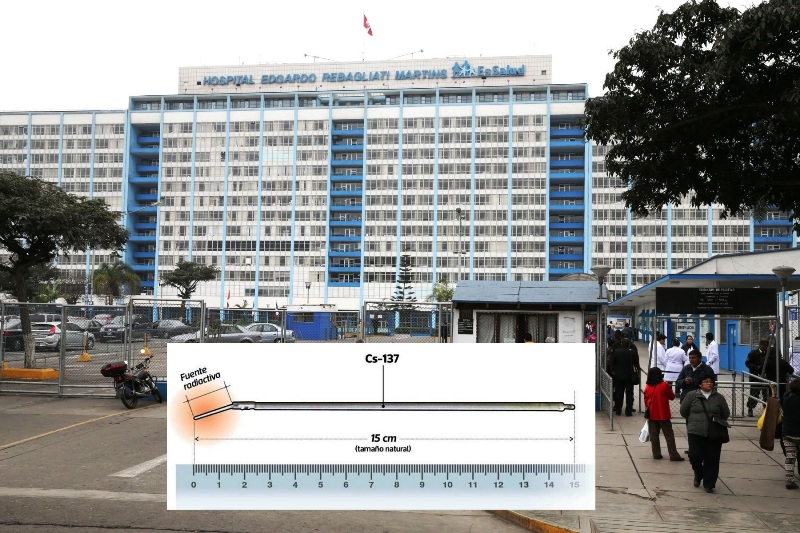 A radioactive guidewire used to treat cancer was stolen from Lima’s Edgardo Rebagliati hospital on May 28.

On the tip of the six-inch wire is a small metallic capsule containing caesium-137 (Cs-137), a radioactive metal used in radiation therapy to kill malignant cancer cells. If mishandled, the substance can lead to severe health consequences including death.

The hospital located in Lima’s central district of Lince issued a statement warning not to touch the guidewire if found, and to maintain a distance of six feet. The wire was one of seven at the hospital, which is one of the largest in Peru’s public healthcare system EsSalud.

The hospital’s radiation therapy director told El Comercio that the wire was being used in treating a patient with uterine cancer. When the doctor went to remove two devices from the woman’s vaginal cavity, one was missing.

“We can’t say if it was lost or stolen. What is certain is that it was lost,” Marco Munive, an official at the Peruvian Institute of Nuclear Energy (IPEN), told El Comercio. “Since it was lost, we have looked in the pipes, disposal bins and washing machines throughout the hospital. We have very sensitive equipment to easily detect radioactive sources.”

Munive added that, while deadly, the Cs-137 wire stolen poses a low risk to serious health problems. Hospital officials warned that third-degree burns were the greatest risk of mishandling the guidewire.

One doctor told Andina that the device has a value of $3,000.

In 1999 a 36-year-old soldier found a radioactive device at the Yanango hydroelectric station in Junin state. After putting it in his pocket for six hours, he began to suffer severe pain in his leg. Doctors ultimately had to amputate his leg.

While small amounts of Cs-137 are found in nature, the amounts used in radiation therapy pose grave health risks, according to the United States Centers for Disease Control.

“These devices are designed to remain sealed and keep people from being exposed; however, if these canisters are intentionally or accidentally opened, the Cs-137 inside could be dispersed,” states the CDC website.