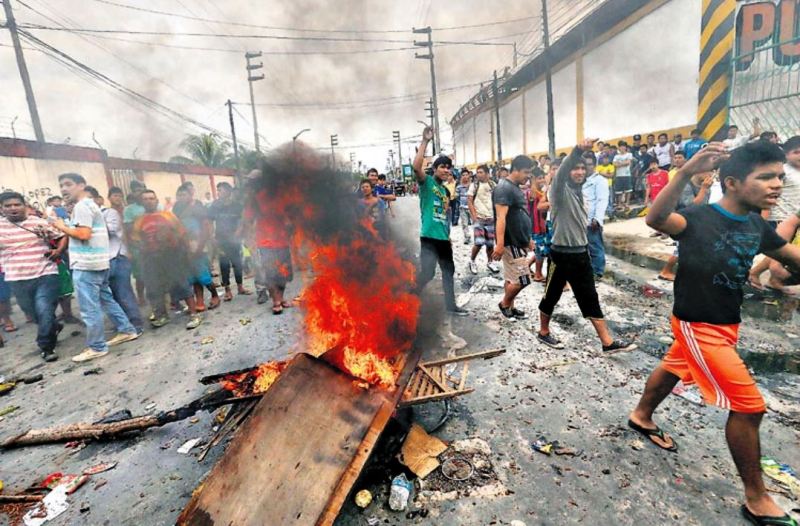 Over 5,000 people marched in the capital city of Peru’s Loreto region to protest the licensing of oil block 192 to a private company.

Protesters burned tires in downtown Iquitos as police engaged in minor clashes to dislodge others from major roads leading to the airport. Passengers arriving to Iquitos by plane were whisked out of the area in police vehicles.

Petroperu did not bid for the oil license and declined to participate in 25% of its production, a right guaranteed by Peruvian law. The company cites its need to focus its resources on the $3 billion upgrade to the Talara refinery, which Peru’s congress authorized on the condition the company not assume more debt.

“A Petroperu participation in block 192 investments would affect the cash flows for the Talara refinery modernization, a project the company is currently focused on,” said Petroperu president German Velasquez.

However Velasquez left the door open for Petroperu to assume control of block 192 when Pacific’s contract expires in 2017. “At that time, if we suppose that Petroperu has completed its current restructuring … the company will be able.”

Loreto congressman Victor Isla will lead a debate in Peru’s congress to amend the previous law which prohibits Petroperu from assuming debt until the Talara refinery upgrade is complete.

“It is a decision that legislators will have to make in congress,” Isla said. “After an evaluation, [Petroperu] may be able to be freed up, if that’s what is wanted, to participate in drilling.”

Prime minister Pedro Cateriano and mining and energy minister Rosa Ortiz will appear in congress to clarify the legal position of the state oil firm.

Governor Fernando Melendez says that the people of Loreto oppose private operation of block 192 because Pacific’s contract does not give them an incentive to take appropriate care of the environment or increase production, of which royalties provide the bulk of the state government’s budget.

“Civil society is organized in a patriotic front and a line of defense just like the authorities today assumed a mature position of serenity,” Loreto governor Fernando Melendez said. “We believe that a way out of this impasse must be achieved through dialogue.”

Pacific Stratus Energy is the Peruvian subsidiary of Pacific Exploration and Production, the Canadian company formerly known as Pacific Rubiales. The company won the right to operate block 192 last week after an initial government auction of the license received no bids.

Block 192 has been operated since 2001 by Argentine firm Pluspetrol, which has had contentious relations with indigenous communities who say the company has contaminated their land.