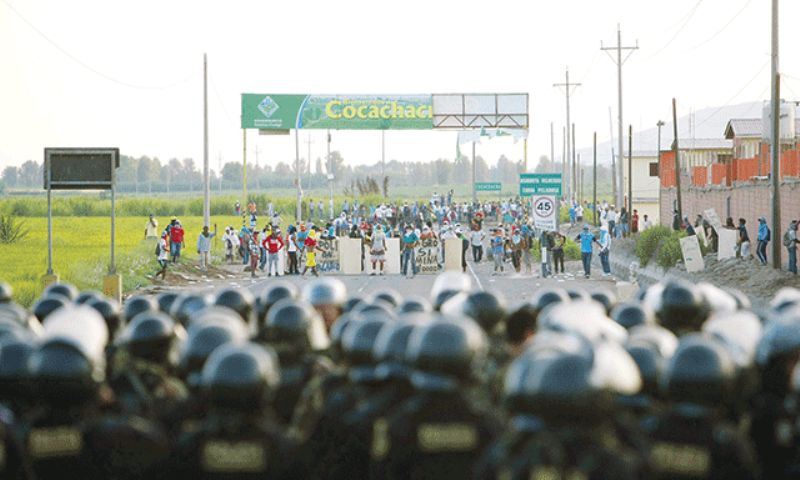 After fruitless talks with the national government, an anti-mining protest leader was taken into custody by police yesterday morning.

Jesus Cornejo and Roger Ramos were arrested yesterday morning for blocking the Panamericana Sur highway in Cocachacra district. Protesters say Cornejo, the most prominent anti-mining leader, was sitting beside the road when he was arrested.

“I didn’t block any road. This is abuse from the police,” Cornejo said. As news of Cornejo’s arrest spread, 200 protesters grew angry and threatened to increase their unrest. The crowd moved to the Pampa Blanca bridge on a nearby road, where they formed lines behind wooden shields and threw rocks at police. About 600 police dispersed the crowd with tear gas.

Cornejo was brought to a police station in Arequipa, two hours from the Tambo valley, which has been the center of protests against the $1.4 billion copper mine. A group of eight protesters followed him to demonstrate outside of where he was held, chanting “Farming yes, mining no!” and “Police are murderers!”

The conflicts broke out just one day after prime minister Pedro Cateriano and key officials from his cabinet came to Mollendo to speak with opposition leaders about the details of Southern Copper’s proposed copper mine. Opposition leaders did not attend the talks. Before leaving, Cateriano told prosecutors and judges not to free those arrested for violence in the protests that started on March 23.

“It is [our] obligation to persuade and make the citizens consider that we do not have the luxury of refusing a project that will bring progress to the Arequipa region, which will above all benefit the neediest who require health, education, employment and infrastructure,” Cateriano said.

In 25 days of protests, roads have been sporadically blocked between Arequipa, Mollendo and Cocachacra. Protesters have also attacked fire stations. Looting prompted the Cocachacra station to close until the conflict is resolved. In another incident, a fire truck in Mollendo responding to an emergency was attacked with rocks. On March 28 two protesters were arrested for throwing rocks at police.

During their visit, government officials rejected the possibility of a regional referendum on the mine. The mayor of Islay province and those of Cocachacra, Dean Valdivia and Punta de Bombon districts issued a statement saying the government had marked a break with the civil society of Arequipa.

The current protests are not the first demonstrations against the Tia Maria copper mine, unpopular in the Tambo valley. 2011 saw protests which killed three. Protest leaders from that year have since been elected local mayors in municipal elections. The mayor of Dean Valdivia has pending charges for impeding public services.

Southern Copper has postponed the start date for Tia Maria production until the end of 2017 or early 2018, from the first quarter of 2017. Yesterday Southern Copper was granted a license to further develop its Toquepala mine in Tacna. The $1.2 billion expansion is expected to double capacity from 60,000 to 120,000 tons per day.