Government to make case for copper mine to Arequipa protesters 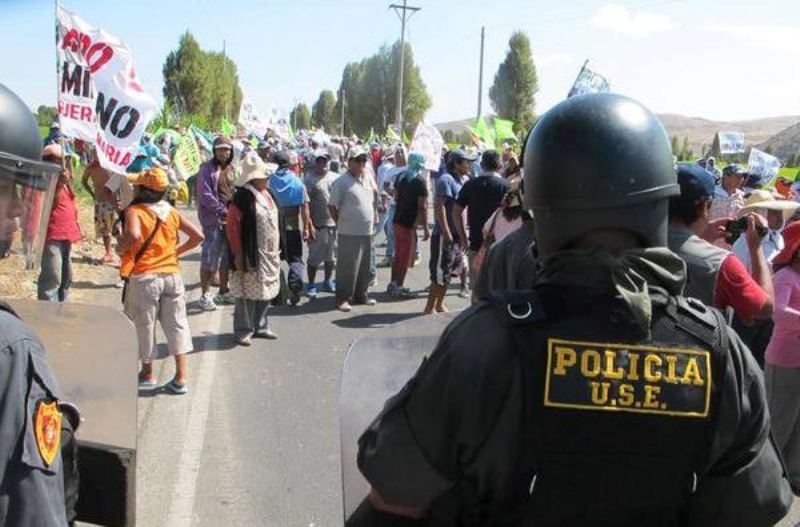 President Ollanta Humala and four cabinet ministers try to convince the local population to end an indefinite protest against the Tia Maria copper mine.

Environment minister Manuel Pulgar has already arrived in Arequipa department accompanied by his counterparts in the mining and energy, agriculture and interior ministries. The team looks to convince local leaders that the $1.4 billion project will not cause environmental damage in the Islay province of Arequipa.

“This Friday, the Minister of Energy and Mines is going to give a presentation to make it clear, especially to the people of the Tambo valley in Islay province and to all of Arequipa, that all the problems with the first environmental impact study, which was rejected, have been corrected and overcome in the second study,” Pulgar told the press. “The second study, which was approved by the mining and energy ministry last August, is significantly different from the first … The state is going to resolve any concerns one by one with technical arguments, and provide honest and accurate information … I am not here to convince, but to show that each element has been addressed in a very profound technical study.”

Pulgar said that clearing activities and dust would be addressed in the presentation. He added that while local water sources will be used during construction of the mine, desalinated water from the Pacific Ocean will be used once production begins.

Presentations on the environmental impact study will be given on Friday by mining and energy minister Rosa Ortiz, who was previously a director in the environment ministry before being appointed to her new post at the height of the Pichanaki oil protests against Pluspetrol in Junin department.

President Humala will visit Arequipa in an effort to “resolve any doubts” about the environmental impact of the Tia Maria mine. “We should work in a dialog to explain and convince the people to give this project a chance under new rules and a new environmental impact study which has been examined,” Humala said from the government palace. He added that Tia Maria is a modern mining project that minimizes environmental damage.

Indefinite protests in which 35 have been injured and 13 arrested entered their 16th day, accumulating a daily economic loss of $160,000. One protest leader told La Republica, “This is not a solution. The people will react with more violence.”

The regional education director for Islay province closed schools indefinitely, citing confrontations between protesters and police which put children’s lives at risk. Over 11,000 students of all grades, including residents of the port city of Mollendo, will stay home during the indefinite strike.

Peru’s interior minister has stated that police will not use deadly weapons against protesters. He added, however, that nobody is immune from being arrested, including local mayors. Protest leaders and local politicians are currently being investigated for violence, extortion and obstruction according to the prosecuting attorney of Mollendo.

Of the factors affecting 2015 GDP in Peru, the Tia Maria copper mine will have the greatest impact on whether the economic ministry’s forecast of 4% growth is reached. Macroconsult, a consultancy in Lima, has identified 15 mining projects worth $8 billion which are paralyzed by anti-mining protests. Southern Copper, which produced 680,000 tons of copper in 2013, has affirmed its commitment to Tia Maria in the face of opposition.