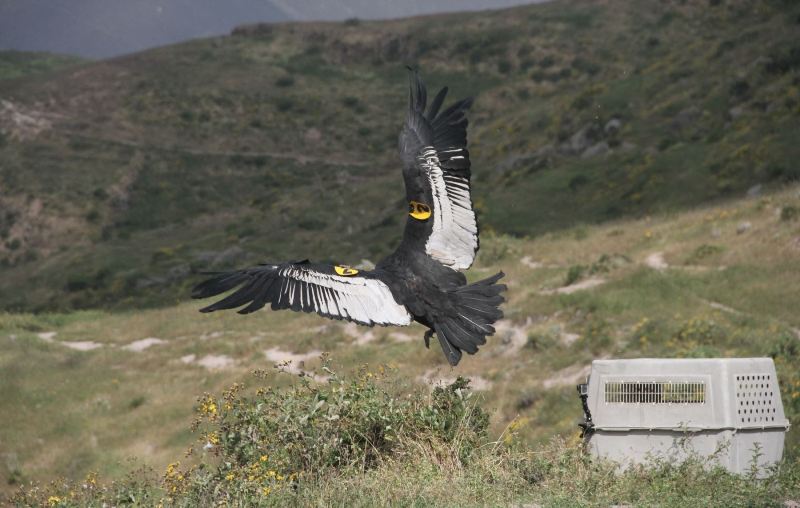 Two Andean condors found poisoned in 2013 were released on Tuesday after two years of rehabilitation.

The condors were found in the Huarochiri province east of Lima department, intoxicated and on the verge of death. Ecological authorities brought the birds to Peru’s national forest service (SERFOR), who brought them to the National University of San Marcos veterinary school.

“After reacting positively to the treatment, the birds stayed in temporary custody at the [Falconoformes Breeding Center] to complete their recovery. In February 2014 they were relocated to Jose Otero’s El Huayco wildlife breeding center, the only center for breeding and raising condors in captivity,” said SERFOR director Jessica Galvez.

The condors were given blood and vision tests while undergoing muscular rehabilitation in order to fly again. When they were deemed ready to be freed, the rehab team put microchips with yellow ribbons on each wing of the condors. The microchips will allow the birds to be monitored by satellite. The yellow ribbons aim to inform local residents that the birds had been cared for by the state. “We hope to gradually create awareness about their protection,” Galvez said.

The program was carried out under SERFOR’s Condor Conservation Plan, which aims to mitigate threats and promote conservation of the threatened Andean condor.

The International Union for Conservation of Nature lists the Andean condor as “near threatened” due to their low reproductive rates and attacks from farmers who believe the condors kill livestock. Because they feed on dead animals, the condors may have ingested poison which was initially eaten by other predators such as Andean foxes or pumas.

“Atahualpa” and “Huascar,” named after two Inca emperors, are 40 and 35 years old respectively and weigh about 25 pounds. With wingspans of over 10 feet, the Andean condor is one of the world’s largest flying birds and a symbol of pride throughout the Andean countries of South America.