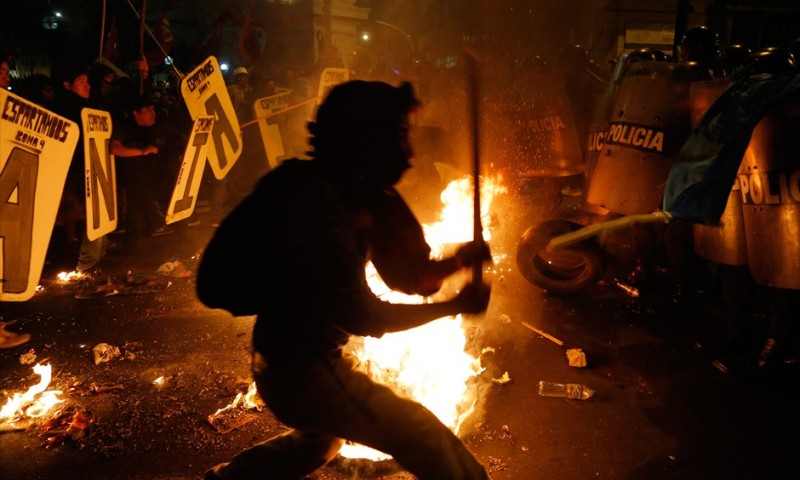 National protests against the Tia Maria copper mine in Arequipa saw some violence and property damage in the cities of Lima and Puno yesterday.

After a peaceful first day, the second day of a 48-hour anti-mining protest brought a few hours of chaos last night to the downtown area of Lima, where no environmental organizations or labor unions had previously announced joining the national protests organized two weeks ago.

Around 3,000 protesters gathered in Lima’s San Martin plaza yesterday afternoon. The crowd burned tires and ultimately moved along Nicolas de Pierola avenue, where they removed cobblestones from gardens to smash windows in cars and businesses. Two police officers were injured and the downtown area was shut down for most of last night.

Protests in Puno completely paralyzed the city. Taxis and buses did not run and businesses did not open in the cities of Puno and Juliaca. The few merchants who opened for business in the La Cachina market were looted.

In Tacna where 4,000 demonstrators marched the town’s main roads, windows were broken in a public ministry truck and some local businesses.

In the city of Arequipa, the regional capital closest to the Tambo valley in Islay province where Southern Copper’s $1.4 billion copper project is to be built, over 3,500 police guarded key strategic sites which proved to be flashpoints for damage and violence in a three-day strike in that city two weeks ago. Over 3,000 demonstrators marched peacefully in the city’s Plaza de Armas.

La Republica reports that anti-mining leaders across the country are trying to organize a larger national protest to be observed in every Peruvian state.

Almost ten weeks of indefinite protests have led to four deaths and over 200 injuries in southern Peru. Attempts at dialogue with local farmers have failed twice. Tia Maria protests have resulted in seven deaths since 2011.