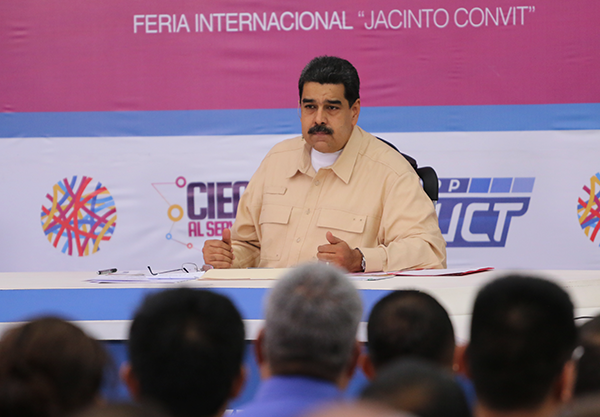 Venezuela’s president has announced the launch of a new cryptocurrency in a bid to save the economy – an idea which is being criticised by the opposition and experts.

President Nicolas Maduro said on television last week that the new digital currency, named the ‘petro’, will be backed by oil, gas, gold, and diamonds, the news agency Reuters reported.

The leader of the country with the world’s highest inflation is yet to reveal how the currency will work.

Venezuela has been hit hard as of late by US sanctions. The country is struggling to move money through international banks since Donald Trump slapped penalties on Maduro for running a ‘dictatorship’.

Cryptocurrencies are a form of digital money designed to be secure and not backed by banks or governments. Some Venezuelans have already started playing with Bitcoins as a way to get around the country’s currency controls and the failing bolivar.

But some experts – and the opposition – have blasted the idea.

‘If any government is willing to set up a fair set of rules for a cryptocurrency, it would be a great thing,’ Sean Walsh of Redwood City Ventures, a bitcoin and blockchain-focused investment firm, told Reuters.

‘But if an administration has a history of unfair treatment of the population, then tacking on a buzzword like ‘cryptocurrency’ isn’t going to change that behavior.’

Along similar lines, opposition lawmaker and economist Angel Alvarado referred to Maduro as a ‘clown’ and said the currency has ‘no credibility’.

Manav Prakash, founder and CEO of fintech platform Blockchain Investment Platform (BIP), said it wouldn’t be difficult to initially set up the currency but there could be challenges that follow.

‘Almost all – if not all – cryptocurrencies are open source till date and so it would not be much work for a government to use previous coins as a template for their own coin,’ he said.

‘Now, it is possible to create such a currency but for it to be secure from hacks and outside attacks it must have a trusted userbase and many miners. Miners are incentivised economically and so this could work if the Venezuela government provides a reliable way to cash out the cryptocurrency to a set an amount of fiat or to redeem a preset amount of commodities/assets. ‘This is a hard route since it includes several variables, and the supply is not controllable by any central entity, but rather, by miners only.’

Venezuela’s official currency, the bolivar, has become essentially worthless against the US dollar in the past year.

A drop in global oil prices and the government’s incompetence to deal with it has left the socialist country’s economy in tatters with food and medicine shortages, riots in the streets, and a sky-high crime rate emerging as a result.