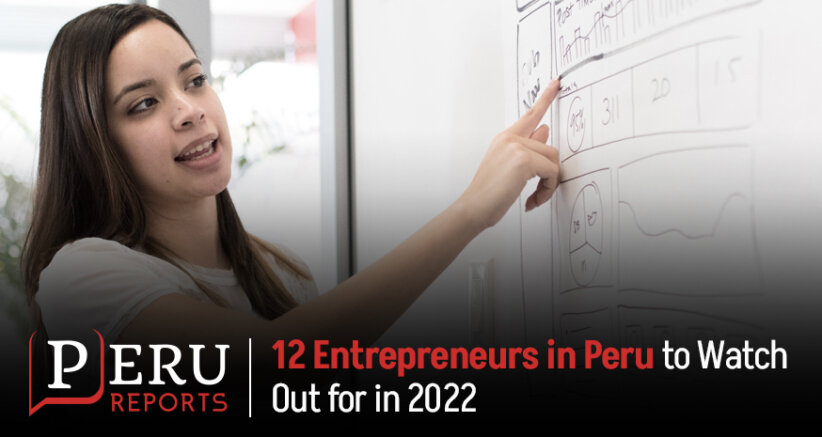 Latin America has been in the news lately, showing the international community what it can do in terms of innovation. Brazil, Mexico, Argentina, Chile, and Colombia are examples of ecosystems with world-class entrepreneurs.

Slightly behind its regional counterparts, Peru’s startup ecosystem has come a long way and is ready to breed its first unicorn.

This undoubtedly is due to a fortunate convergence of institutional support, Venture Capital activity, and, overall, the creativity and passion of talented founders.

Every year that passes, more and more Peruvian startups are reaching renowned accelerators like Y Combinator.

Peru Reports wants to highlight 10 entrepreneurs that are going to be making headlines sooner than you think.

Most of them have already had international exposure and some are starting their most passionate projects.

Keep in mind these names. These are the Peruvian entrepreneurs that are going to change the region and the world.

Carlos Lau is is the founder and CEO of Kurios, a startup that trains Latin American talent in product, growth, and data analytics.

They have instructors working at some of the most innovative companies in the world: Google, Stripe, Dropbox, Uber, Amazon, Facebook, Rappi, Mercado Libre, and more.

Carlos was part of the founding team at Uber Peru (specifically the 4th employee), where he contributed to the 60x company growth and led the Supply Growth Team.

He launched a driver referral app called UberDost and made it the top supply acquisition channel in Peru in 2016.

It also made Lima the number one city in the world with the highest number of drivers acquired weekly, compared to other cities around the world.

Kurios was part of the Y Combinator’s S21 batch. Some of the clients of Kurios are Walmart Mexico, Banorte (2nd most important bank in Mexico), Mercado Libre, BCP (the leading bank in Peru), Alicorp (leading CPG in Latin America), and Sura (a top pension fund).

Dusko Kelez is the founder and CEO of Hapi, a wealth tech startup offering a trading app that democratizes Latin American consumers’ access to the US stock market.

In Hapi, users can easily register themselves, transfer the funds they want to invest, and trade stocks in real-time with no commissions.

Dusko studied economics at Universidad del Pacífico in Lima and got his first job at PriceWaterhouseCoopers (PWC)’s tax practice.

He has previous startup experience, also being the COO of Grin, Taximo, and Grow Mobility, and in 2014 he founded Duke, a men’s clothing brand.

Carlos Andrade is the co-founder and CEO of Manzana Verde, a wellness e-commerce with operations in Peru and Mexico that was born with the idea of making it affordable and accessible for people with a sedentary lifestyle to acquire healthy habits.

He founded the startup alongside Larissa Arias, COO, whom he met at the University of Piura (UDEP), in northern Peru.

Manzana Verde was called the best Peruvian startup by Seedstars.

Recently, they raised a $1.5 million seed round led by Matterscale Ventures, along with FJ Labs and Clout Capital. Salkantay Ventures, MrPink VC, and Roble Ventures also participated in the round.

During the past two years, Manzana Verde went from delivering 100 to 6000 meals per day, and so far they have delivered 700K orders of healthy food.

Already in five different cities between Mexico and Peru, Carlos and Larissa are planning the expansion to the rest of the Latin American region.

Pedro Neira Ferrand is the founder and CEO of MegaBite, a foodtech startup founded in Lima at the beginning of 2021 and rapidly expanding to the rest of Latin America, starting with Mexico.

MegaBites sets up a network of dark kitchens with their own brand of delicious cuisine: burgers, gluten-free pizzas, Chinese food, poke bowls, and maki rolls, among others.

In other words, it’s a digital restaurant holding that focuses on on-demand services.

According to Pedro, they want to become the “Spotify of Food Delivery.”

In January 2022 MegaBite launched its own app.

Pedro is a serial entrepreneur, as well as a startup manager. He has been CEO of four different ventures since he was 27 years old.

Among the most successful, he was the founder of Adondevivir.com, a popular real estate search engine, and Mi Media Manzana, a popular app for couple matching.

Originally from Colombia, María del Mar Vélez is the founder and CEO of Peru-based Crack The Code, an edtech startup that seeks to transform education in Latin America through online classes for children on science, technology, engineering, and math (STEM).

María has argued that in modern-day Latin America only 55% of the tech positions are covered, so Crack The Code value of proposal is to combat technology illiteracy.

Crack The Code has 1,300 active students in 21 countries, and recently raised $2.7 million from Kaszek.

It’s the first investment of Kaszek Ventures in a Peruvian startup.

María comes from an entrepreneurial family. She’s the sister of David Vélez, the founder and CEO of Nubank, the largest fintech bank in Latin America.

During her studies, she worked at Peruvian Development Group, a NY-based, Peru-focused private equity fund.

After graduating from college, she worked for six years as an analyst and associate at JP Morgan in the Asset Management & Alternative Investment groups.

From there, she moved to Lima and founded Crack The Code, and the rest is history!

Daniel Bonifaz is the co-founder and CEO of Kambista, a fintech startup that was one of the first digital platforms that allowed currency exchange operations from Peruvian soles to U.S. dollars in Peru.

Founded in 2016, Kambista was selected in StartUp Peru’s 5th and 6th generation batch by 2017.

Daniel is also co-founder of TiendaDA, an all-in-one SaaS platform for female entrepreneurs.

In December 2021, he was selected by Bloomberg Linea as one of the 100 innovators of Latin America, alongside Paulo Valdiviezo, co-founder of Kambista.

Daniel is a popular content creator of entrepreneurial/financial topics with more than 56,000 followers on Instagram, and more than 325,000 on TikTok.

Sergio Acuña is the Regional Manager for Latin America and Spain of Amberlo, a legaltech startup with a cloud-based management software built for legal professionals, providing all the essential tools needed to help lawyers around the world organize, secure, and optimize their processes and information.

Sergio is currently leading the expansion of Amberlo in Peru.

Lawyers can use Amberlo to manage legal cases, contacts, and documents.

But also to plan activities, organize communication, take notes, track hours and expenses, issue invoices and get them paid on time.

In that way, Sergio wants to help modern-day legal practice to run efficiently.

With an extensive experience in legaltech, and working in multinationals like Nestlé and BAT, Sergio holds an MBA from EAE Business School.

He is also very passionate about Ironman, being a certified triathlon coach.

Mario Calderón Galdós is the co-founder and CEO of SkillMapper, an edtech startup that uses artificial intelligence to develop an optimal online education platform.

In the words of Victor Sánchez, co-founder and CTO of SkillMapper, they want to be the “Google of virtual courses.”

The project was born within the INSEAD innovation program, part of Station-F, the world’s largest startup facility, located in Paris, France.

Mario worked for nine years at Facebook (now Meta), where he gained experience in Data Science and data analysis.

With this knowledge, he created a data and analytics course for Crehana.

That was when he discovered in person the state of the online education platforms.

After the first experience in France, SkillMapper went to the Latin American countries and had good response and traffic in Argentina, Colombia, and Chile.

The startup offers three products: a course and workshop search engine, a creator of virtual communities, and a Chrome extension to connect the educational profile with potential employers.

Anais Cisneros and Michelle Fischman are the co-founders of Amela, a community of female founders in Spanish-speaking Latin America.

In Amela they help female founders with funds mapping and making introductions.

They also provide a mentor pool that helps them with their pitch, their deck, their data room, and their business model.

Although their main objective is to connect female founders, Anais and Michelle have commented that they try to focus on early-stage founders because that’s where they believe they can really add value.

Amela organizes meetups every month to build community, where they bring speakers like Lolita Taub and Antonia Roja.

Anais also works at TechTree, a career networking platform to help developers from across the world to get mentored, grow a network, and experience a better recruitment experience, as Chief of Staff and Head of Operations.

Michelle also works at Nazca, an early-stage Venture Capital firm that provides empowerment to founders in Mexico and Latin America.

Horacio Faudella is the co-founder and co-CEO of GoJom, a one-stop-shop for real estate solutions.

This proptech startup, which is part of the Y Combinator W22 batch, has big data and artificial intelligence technology that creates a faster and easier way to buy, sell, and rent properties in Latin America.

In December 2021, GoJom raised $1 million in a Series A round led by Technopeak.

In May of that same year, they expanded operations to Colombia. And now they have just landed in Ecuador.

Horacio is a serial digital entrepreneur since 1997.

He was co-founder of Adonde.com, the most important real estate search engine in Peru for more than a decade.

He was also co-founder of Turismoi.com, the biggest touristic tours sales and distribution platform in Latin America. He co-founded GoJom alongside Andres Gonzalez-Olaechea and William Wong.

He is a consultant in growth hacking, inbound marketing, SEO, SEM, UI optimization, and UX, among other topics.

But above all, Horacio is a curious mind and an enthusiastic researcher of new technologies, human behavior, and mass psychology, applied to tech and digital solutions.

Gonzalo Begazo is the co-founder and CEO of Chazki, a delivery logistics startup that uses artificial intelligence to facilitate last-mile delivery and logistic management in Latin America.

In April 2021, Chazki raised $7 million from Talipot Holdings. Grupo Falabella also contributed to the round.

Gonzalo founded the startup in 2015 after four years of working for Google, in Mountain View, CA, as a Finance Director.

He also worked for Microsoft, Goldman Sachs, IBM, and Digeo, a company started by the co-founder of Microsoft, Paul Allen.

In December 2021, he was selected by Bloomberg Línea as one of the “100 Innovators of Latin America.”

Diego Olcese is the co-founder and CEO of Crehana, an edtech startup for corporate training and development.

The platform offers over 700 courses in partnership with more than 400 experts in the industry to provide specialized training.

During 2020, Crehana saw a triple-digit growth as more companies sought to re-skill and up-skill their workforce.

In August 2021, Crehana raised $70 million in a Series B round led by General Atlantic, becoming the most funded edtech in Latin America.

Some of the goals of this round are to expand Crehana to the Brazilian market.

Diego founded his first company when he was 15 years old and founded a digital marketing agency when he was 22.

Prior to founding Crehana in 2015, Diego was the founder of Flikn.com, an online education community that he started after visiting Silicon Valley back in 2013 and was feeling excited about the innovation vibe there.

After acquiring Acsendo, a Colombian HR SaaS, Diego affirmed that wants to end 2022 with 7X growth in comparison with the previous year.

Disclosure: This article mentions clients of an Espacio portfolio company.

Over 3,000 years of ancient Peruvian civilization is on display in Paris this summer