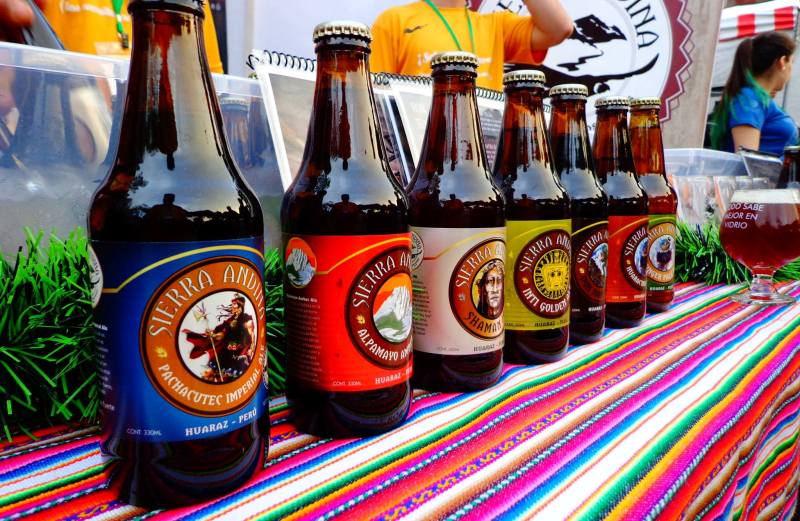 Peru’s microbreweries are fighting to change tax laws which put them at a disadvantage against the economies of scale of SABMiller’s local monopoly.

The small but growing craft beer industry in Peru is pushing Congress to change its excise tax scheme so small breweries which sell less than 34,000 barrels per year pay less in excise tax than large breweries. With less than 1% of Peru’s beer market, they say the tax presents an unfair barrier to growth.

Peru’s largest brewer, Backus y Johnston, controls over 96% of the beer market, and that share is set to increase to over 99% after AB InBev completes its takeover of Backus parent company SABMiller. With almost 12 million barrels sold in 2015, the monopolist’s economies of scale allow it to pay a fraction of what the small businesses pay per liter in excise tax.

“Without a doubt, taxes are our biggest obstacle to growth. Absolutely without a doubt.” says Ted Alexander, founder of the Sierra Andina brewery in Peru’s central city of Huaraz. “Literally every single month between the 10th and the 17th, we all have to scratch our heads and come up with $10,000 to throw to the government.”

Under current tax law, breweries pay an excise tax of either $0.38 per liter or 30% of the retail price – whichever is higher. Consumers pay $3 on average for a 12-ounce bottle of Sierra Andina, compared to $1.25 for a 21-ounce bottle of popular Backus brand, Pilsen. Based on those prices, Sierra Andina would pay $2.75 in excise tax per liter while Backus would pay just $0.67.

According to their annual report, Backus paid $600 million in excise tax on $1.2 billion in sales in 2015, from which the company earned $360 million in net income.

“Backus pays a tremendous amount in tax, but their beer is far less expensive than ours,” Alexander says.

Sierra Andina pays higher production costs per unit on much smaller volume of 130 barrels per month, and it also pays more for higher-quality malt and hops than Backus does for its lighter, American-style lagers. With a smaller tax burden for his business, Alexander says the extra money would go back into Huaraz’s local economy in the form of jobs.

Popular Force congressman Luis Galarreta recently submitted a bill to Congress which will modify Peru’s excise tax by allowing companies which brew less than 34,000 barrels per year to pay a fixed excise tax of $0.38 per liter. In 2016 elections, Keiko Fujimori claimed Popular Force would work for small businesses and tried to portray President Pedro Pablo Kuczynski as the pawn of large multinationals.

The bill is similar to the scheme in the United States, where small breweries have enjoyed lower federal excise taxes since the 1970s. Brewers of less than 2 million barrels per year paid just $7 per barrel for their first 60,000 barrels, compared to $18 per barrel for large breweries.

In 2015, the United States went further in lowering taxes for small brewers. The Craft Beverage Modernization and Tax Reform Act lowers the beer excise tax to just $3.50 for the first 60,000 barrels and raises the threshold to be considered a large brewer to 6 million barrels per year. And after the first 60,000 barrels, small brewers pay only $16 per barrel in excise tax.

Peru’s finance ministry did not comment on the proposed change.

But Galarreta’s proposal faces opposition from unlikely sources including Comex Peru, a chamber of commerce which promotes free markets, private investment and international business. Comex Peru general manager Jessica Luna says the law will hurt competition by favoring some companies over others and weaken the rule of law.

“This new system is discriminatory since it uses different tax regimes for products in the same category,” Luna told El Comercio. “What is even worse is that it would violate trade agreements which clearly guarantee equal treatment for domestic and foreign products.”

Alonso Segura, the former finance minister under President Ollanta Humala, opposes the law because excise taxes are designed to discourage undesirable behaviors that create external costs borne by the state.

“This specific measure is meant to reduce the incentive to consume, mainly in the most vulnerable groups that would tend to go to cheaper products [if taxes were reduced],” Segura told Gestion last year.

Critics argue that the current system may promote irresponsible drinking by incentivizing beer which is inexpensive to produce in order to keep the selling price low.

The craft brewers have an unlikely ally in Grupo Aje, one of Peru’s largest multinationals and producer of popular beverages including the Kola Real soda line, Pulp juices and Sporade sports drinks. If small brewers paid a fixed excise tax per liter, the company says it could competitively launch a beer brand to complement its portfolio of low-priced beverages.

While the craft brewers want a less prohibitive tax for superpremium beers, Grupo Aje wants a lower tax so it can compete with Backus in the subpremium segment – the result Segura cited for his opposition to the new scheme.

Another criticism of Galarreta’s bill comes from Segura’s deputy minister Enzo Defilippi, who told Gestion that the new excise tax would cost the government $60 million per year. But Alexander says the tax could be redesigned without forgoing revenue.

“Instead of distributing the tax burden along the whole chain, it currently gets lumped on to the producer,” Alexander suggests. “They could distribute that excise tax along the distribution line instead of crushing the economy at its source. Have each vendor pay 10% and the government is still receiving what it needs to keep the organization afloat.”

In fact, Alexander supports his family with his first business, a mountaineering guide and tourism agency in Huaraz. But he does not see Backus as a competitor neither in the market nor in getting the new tax scheme implemented. He points out that their attempts to launch craft beers have failed, but they know that Peru’s consumers will ultimately follow global trends.

“With 99% of the market they don’t have anywhere to go. They need one of us to develop the craft market so they can then buy somebody out. But that can’t happen as long as taxes are impeding growth.”