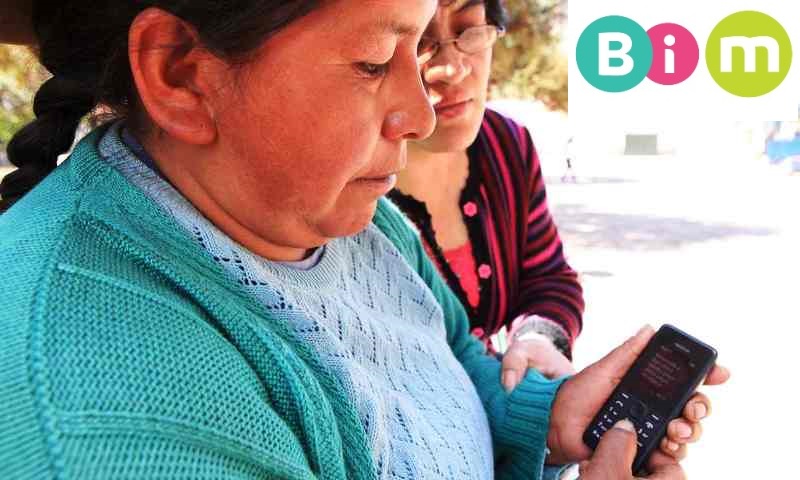 Bim does not require a bank account to sign up. Users do not need available minutes or data on their mobile plans to send or receive money. The simple language and interface was designed to be easy to use for the three out of four Peruvian adults who do not have a bank account.

“We want this program to reach the people who do not have bank accounts,” Pagos Digitales Peruanos general manager Carolina Trivelli told Bloomberg. “That’s the woman who lives in the countryside and has a nine-key cell phone, a 2G connection and a prepaid phone plan.”

“[Low-income people in Peru] do not like going to bank offices, which are intimidating, overly tidy and the employees speak a language they do not know,” Trivelli told El Comercio. “So the idea of agents was born, where your neighborhood store allows you to make deposits and withdraw money from your account. This has brought [banking] to the people.”

The World Bank highlighted increasing productivity as a key goal for Peru in sustaining economic growth. And just as mobile communications increased GDP growth in the developing world by 0.8% for every 10 additional phones per 100 residents, mobile money and access to financial products will allow people to spend more time being productive.

“[Mobile banking] is a faster, cheaper and safer way to transfer money than the alternatives, such as slow, costly transfers via banks and post offices, or handing an envelope of cash to a bus driver,” according to The Economist. “Rather than spend a day traveling by bus to the nearest bank, recipients in rural areas can spend their time doing more productive things.

In Peru, where over 39% of districts do not have a bank or ATM, mobile banking helps rural workers overcome poor infrastructure and difficult geography. Carrying or hiding large amounts of money also exposes small business owners to significant risk of loss from crime or accidents.

“More than anything, Bim is useful because I do not lose a day’s work if I need to buy more balls of wool,” a handicrafts vendor in Cusco told The Guardian. If she pays via Bim, the wool will be delivered to her. “If I have to go into town to buy wool, I’m wasting time when I could be working.”

Suppliers are also looking to save on costs of collecting debts from their clients. Backus and Johnston, Peru’s largest brewery, is eager to join the payment system in order to avoid collecting cash payments from its 115,000 retail accounts. Company treasurer Luis Guzman told Bloomberg that the company collects 15 million coins every year.

In addition to simplifying the logistics of moving money, financial inclusion also increases national productivity by expanding access to financial services such as savings accounts, insurance policies and financing for business.

Increasing financial literacy and access to banking has boosted the economy, especially in Kenya where workers’ incomes increased by 5% to 30% after they started using mobile payment systems. In many African countries, more citizens have mobile money accounts than traditional bank accounts.

Once customers begin using Bim, the banks hosting their accounts will be able to determine credit ratings for users based on their transactions and offer loans and other financial products to help them grow their businesses.

Bim is the world’s first digital wallet to incorporate all of a country’s banks and credit unions. Pagos Digitales Peruanos aims for Bim to have 5 million users by 2021.

Currently Bim allows its users to send and receive money or add minutes and data to their mobile plans. Users are charged $0.15 for transactions below $30, $0.45 for $30 to $150 and $0.60 for over $150. Users can deposit or withdraw cash from Bim agents, who receive a commission for each transaction. There are an estimated 7,000 authorized agents throughout Peru.

Later this year Bim hopes to offer ATM service and payments of utilities and other merchants. The service is available through Movistar, Claro or Entel, three of Peru’s four mobile service providers. The fourth, low-cost service Bitel, is scheduled to join the network this year.

The power of mobile money (The Economist)