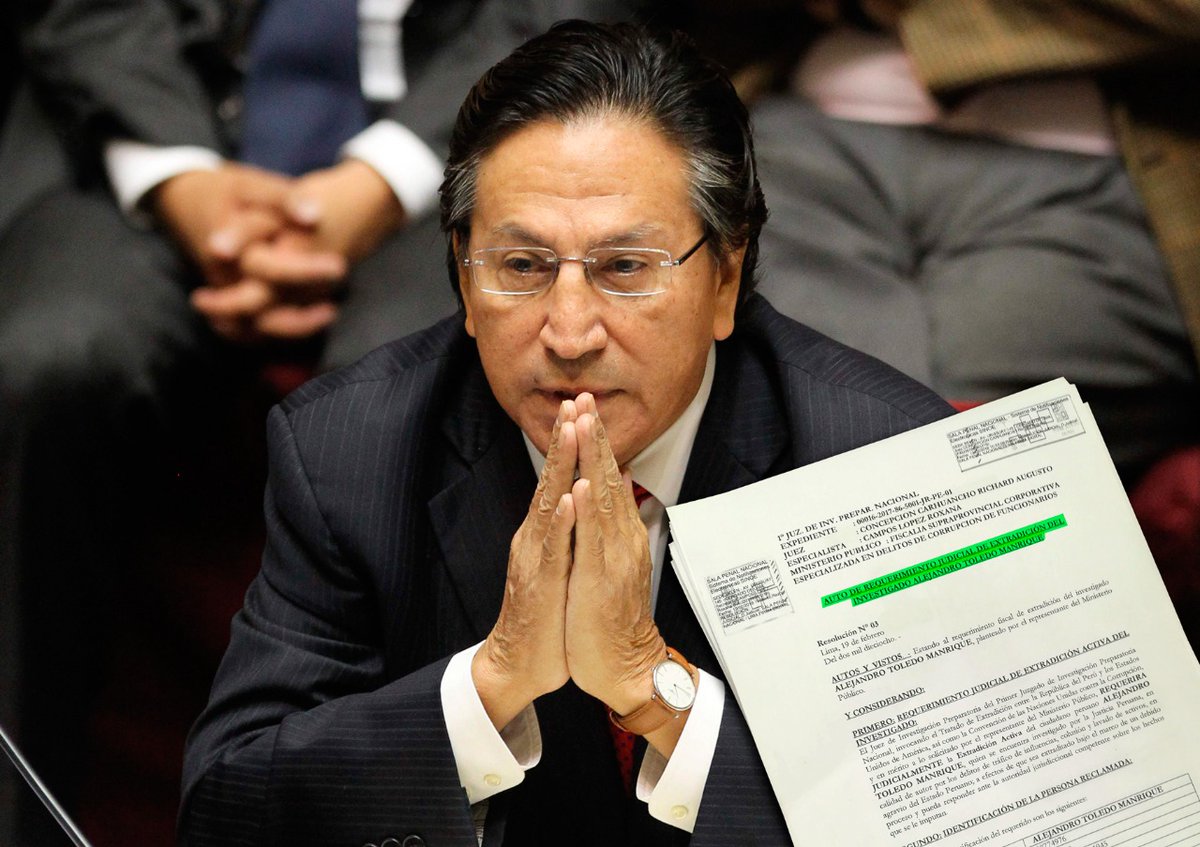 A Peruvian judge has requested the permission of the United States to extradite the ex-president of Peru, Alejandro Toledo, back to his home country to face trial on corruption charges. Toledo has been accused of receiving bribes of up to $20 million from the Brazilian construction company, Odebrecht, and spending it on lavish real estate purchases.

Toledo, who was president of Peru from 2001-2006, has been accused of laundering money, conspiracy, and influence-trafficking. In exchange for the bribes, he is alleged to have offered Odebrecht a highly lucrative highway contract in Peru. The ex-president, now 71, could be extradited back to Peru if the Peruvian Supreme Court approves the request. The foreign ministry will then have the final say in whether he is extradited.

Toledo has been residing in California, according to Peru news site La Vanguardia, despite a ruling one year ago from Peru judge Richard Concepción requesting his international capture and return to Peru in order to begin a preventive prison sentence.

According to La Vanguardia’s report, Toledo is accused of putting the bribe money in offshore banks and using it to pay for mortgages on his personal properties in Lima and Punta Sal, amounting to a value of about $5 million.

The Odebrecht scandal has engulfed the entire Latin American region, as well as countries further afield in Africa and Europe. The Brazilian construction conglomerate, which built venues for the 2016 Olympics, the 2014 World Cup, dams and airport terminals around Latin America, and the subway system in Caracas, has been caught in a web of corruption that extends to more than half of the countries in Latin America.

Prosecutors around Latin America and the United States have discovered illegal dealings up to the highest levels of power in up to 16 countries.  Odebrecht bribes have oiled presidential campaigns and bolstered careers in exchange for construction contracts in the affected countries.

The Brazilian government has been hardest hit by the accusations – almost a third of its ministers are facing charges in the scandal. The ex-vice president of Ecuador, Jorge Glas, is the highest-ranking official to be accused of corruption. Glas was convicted in December 2017 of taking up to $13.5 million in bribes from Odebrecht. He is now serving six years in prison.

Colombia has already convicted a former transport minister and a senator. A former chief prosecutor in Venezuela, Luisa Ortega, has been fired after alleging that Nicolás Maduro’s socialist government accepted over $100 million in bribes from Odebrecht.

Officials in Mexico, Panama, Chile, Argentina, Portugal, and Mozambique have also been implicated in the far-reaching scandal.

The former CEO of Odebrecht, Marcelo Odebrecht, is currently serving a 19-year jail term in Brazil following accusations against him of bribing scores of officials throughout his home country. More than 70 former Odebrecht employees have been disgraced in the scandal, with many serving jail time for corruption.

Protestors have hit the streets throughout Latin America, demanding justice in this newest chapter of the region’s dark history.

“Protesters are demanding people be held responsible for the negligence and corruption that are part and parcel of the historic inequalities in many of the region’s countries,” political analyst Geovanny Vicente Romero told the BBC.

The Odebrecht web is still being untangled – and the full extent of the damage done around the world remains to be seen.