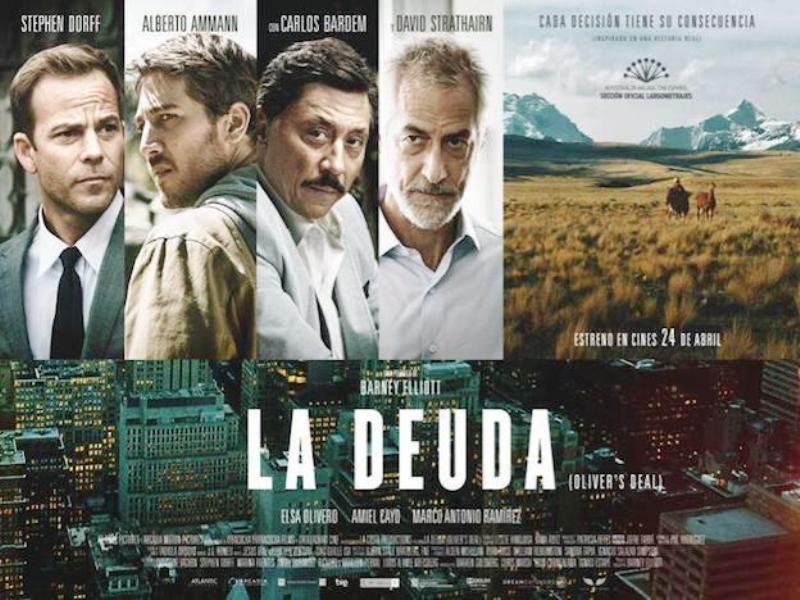 “The Debt,” an American film which explores Peru’s sovereign-debt lawsuit and other issues, opened in U.S. theaters last week.

The film’s plot entwines the stories of American hedge fund manager Oliver, a nurse struggling to care for her sick mother and a rural farmer’s struggle against pressure to sell his family land.

“The Debt” follows Oliver, portrayed by Steven Dorff, in his pursuit to redeem bond debts worth $120 million from the Peruvian government. The plot is inspired by the current dispute between American hedge fund Gramercy Funds Management, which is trying to redeem more than $1 billion for bonds issued 40 years ago.

“The story captured my attention because I felt a lot of injustice,” American filmmaker Barney Elliot told Utero. “You grow a country by investing in it, so I couldn’t understand how a foreign company that knows nothing about the situation could get involved without knowing the consequences of their actions. That was the seed. I felt a fire inside. I started researching and I knew I had to write about it.”

In the 1970s the military dictatorship of President Juan Velasco resulted in the expropriation of 23 million acres of farmland. Landholders received bonds with maturity dates of 20 to 30 years, on which the government defaulted in the 1980s economic crisis.

In 2006 Gramercy Funds Management began buying those bonds in anticipation of the United States-Peru Free Trade Agreement taking effect in 2009. Now Gramercy is looking to compel Peru’s government to pay $5.1 billion for the long-defaulted bonds.

Most critics have highlighted the film’s attempt to cover too much. Instead of focusing on the arguments for and against the defaulted bonds, the plot also incorporates Peru’s hot-button issue of social conflicts surrounding mining and energy projects. In order to double his $60 million position in the bonds, Oliver must convince a rural peasant to sell his land to the local hacienda baron.

Peruvian critics note that the plot’s inspiration comes from a good place but may be a little thin.

“It is strange, to say the least given the history of Wall Street financiers, for them to discover their kindheartedness on Peruvian soil,” Sebastian Pimentel writes for El Comercio.

Carlos Anderson, a spokesman for an umbrella group of local bondholders, told Bloomberg the film was biased against Gramercy Funds Management.

“[Peruvian] bondholders are happy that, at long last, there is someone defying the Peruvian government and at least bringing them to the table,” Anderson told Bloomberg. “If it had only been us, they would have continued doing what they’ve been doing for the last 40 years.”

Anderson added that 80% of the outstanding debt is owned by Peruvian companies and citizens.

“The Debt” was filmed in New York, Lima and the rural highlands outside Huaraz in the northern state of Ancash. It captures fascinating imagery of snow-capped mountains and rolling prairies in Ancash, as well as a grittier side of Lima.

“The Debt” is the first full-length production by Barney Elliot, a resident of Lima since 2009. The film stars Stephen Dorff, Brooke Langton, David Strathairn, Carlos Bardem and Alberto Ammann.

Watch the film’s official trailer below.

Review: ‘The Debt’ in This Barney Elliott Film Is a Commodity (New York Times)