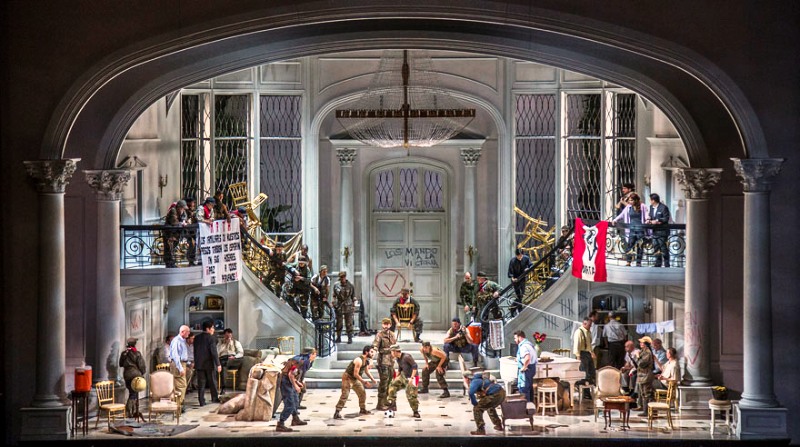 An American opera house premiered on Monday the “Bel Canto” opera, which is set during the MRTA rebel occupation of the Japanese ambassador’s home in Lima.

The opera produced by the Lyric Opera of Chicago is based on Ann Patchett’s 2001 novel, “Bel Canto,” which won the 2002 PEN/Faulkner Award for Fiction. While the novel is set in a fictional Latin American country, it was inspired by the Tupac Amaru Revolutionary Movement (MRTA) occupation of the Japanese ambassador’s Lima home in 1996.

The storyline of the Chicago opera house’s first production in 10 years centers on the power of music in transcending differences and bringing humans together. The opera was produced by Peruvian composer Jimmy Lopez and Cuban-American playwright and Pulitzer Prize-winner Nilo Cruz.

“By accepting this assignment, I felt a great responsibility as a Peruvian. It was important and necessary to me to make clear the links between the plot and what really happened,” Lopez told El Comercio. “We clearly say that everything happens in Peru and although the names are characters from the novel, we quote the name of the terrorist group with the letters: MRTA.”

The opera which features songs in English, Spanish, Japanese, Russian and Quechua opened to positive reviews in the New York Times, Chicago Tribune, The Economist and more. The Quechua aria was an homage to Saint Rose of Lima.

“Though not without flaws and too prone to sweeping, melodramatic outbursts that become predictable, even cloying, the opera is theatrically and musically effective,” writes Anthony Tommasini in the New York Times.

“The score by Mr. Lopez, 37, is fairly tough stuff. At its best, especially in the brutal episodes in which the terrorists storm the house, unhinged by resentment and hostility, the music is fraught, gnashing and blazingly orchestrated. Andrew Davis, the Lyric’s music director, led an assured and colorful performance.”

In December 1996, 14 Tupac Amaru Revolutionary Movement (MRTA) rebels stormed the San Isidro residence of the Japanese ambassador to Peru during a party. The guerrillas held 72 guests hostage for 126 days.

In April 1997, when 197 commandos sieged the house via underground tunnels inspired by the Chavin de Huantar archaeological site. The assault freed 71 of 72 hostages and killed all 14 rebels.

After the military operation, intelligence agents under President Alberto Fujimori executed at least one and as many as thee guerrillas who were not killed during the assault. The Inter-American Court of Human Rights ruled in June that Peru denied due process to an executed rebel.

After 13 years as a fugitive, Peruvian military commander Jesus Zamudio turned himself in to authorities in August to face charges in the murder of Eduardo “Comrade Tito” Cruz.

Watch a promo trailer of “Bel Canto” below.