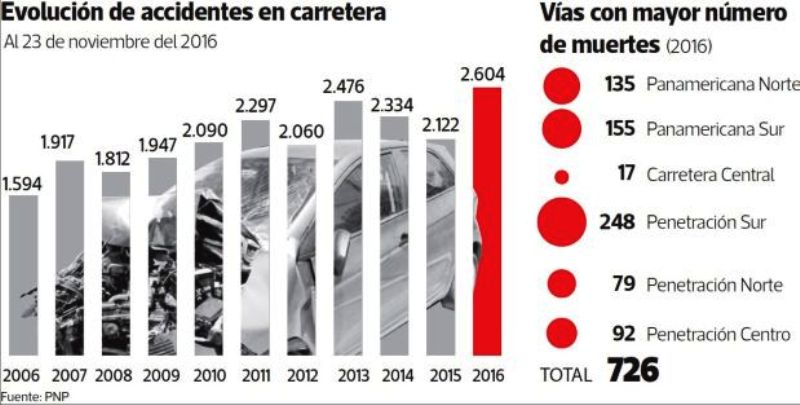 Dozens of people were killed during holiday travels on Peru’s dangerous rural highways.

At least 46 people died in fatal car and bus accidents around Peru since Dec. 20. Almost all of the accidents occurred in the rural highlands of central and southern Peru where poor roads snake around the high peaks of the Andes Mountains.

On Dec. 20, 13 police officers were killed and 12 injured when a bus fell into a ravine from a mountain road in Apurimac. La Republica reports that the driver fell asleep at the wheel.

On Dec. 24, two people were killed in a head-on collision in the Urubamba province of Cusco. Eight people were injured including five tourists from the United States, United Kingdom and Australia. Two others were killed on the same day in Cusco when a bus rolled down a mountain in La Convencion and another woman was killed when she was run over by a truck in Calca.

On Dec. 27, 13 were killed in Ayacucho when a bus carrying 16 people fell 1,300 feet from a mountain highway into a river due to excess weight.

The same day, six people were killed in Huancavelica when their truck fell 1,000 feet into the Mantaro River. Among the dead was Nuevo Occoro district mayor Roberto Ccente and his wife.

On Dec. 29, six people were killed in Ancash when their bus from Huaraz fell 300 feet into a ravine. Later that evening, three were killed south of Lima when their truck flipped several times after crashing into a stoplight.

Traffic fatalities are common in Peru’s Andean highlands where poor roads are navigated by drivers of old buses at high speeds. The deaths generally spike around rainy seasons as well as the holidays of Christmas and Peru’s Independence Day, when families take vacations.

A police report published before these accidents detailed that 2016 saw the most traffic accidents and fatalities in Peru in more than a decade. The report attributed 70% of deaths to speeding, reckless driving and drunk driving.

Experts say that the state needs to exert more control over bus services in rural areas which often don’t have bus terminals.

“Road transport service is not only provided by formal [buses],” says Lino de la Barrera, a former director at Peru’s transportation and communications ministry. “We have vehicles authorized by the ministry, by state governments and by municipalities. We need to have an orderly and systemized record of who is driving. [Peru’s bus authority] Sutran has to review its procedures to make them more efficient and viable.”