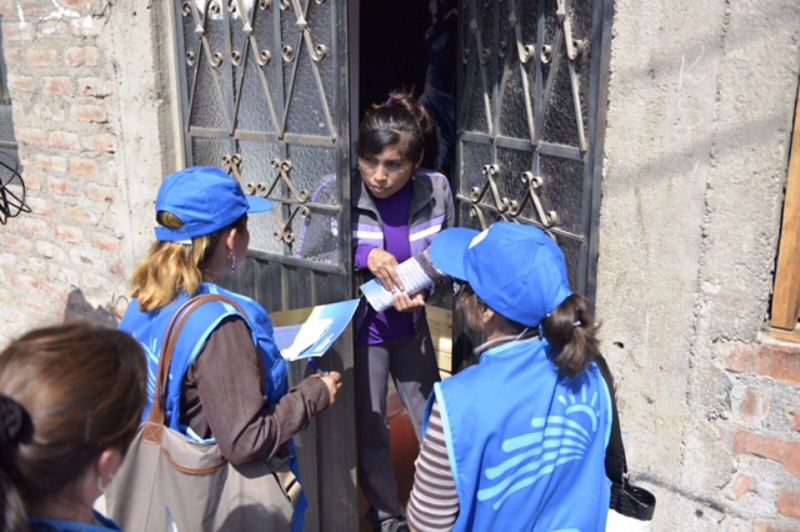 New leaders of the opposition to southern Peru’s Tia Maria copper project will look to continue demonstrations to protest the mine.

Last week Southern Copper began a community outreach program which saw company representatives knocking on doors in Arequipa’s Islay province to explain the details of the $1.4 billion copper mine. On Sunday the company unveiled a $200,000 remodeling of a church in the Dean Valdivia district.

During the mass however, 200 protesters descended on the church shouting “Farming yes, mining no!” A team of 50 police prevented them from entering the church, where 40 residents could not leave for over an hour.

“We do not want to change opinions. What we want is that those people who do not have access to information have access to the proper information,” said Guillermo Fajardo, Southern Copper’s representative in charge of the public relations campaign. “This is accompanied with other projects aimed at education, health and productive development.”

Southern Copper recently offered to invest $31 million in the Tambo valley with no strings attached. However Fajardo said that 10% of the 400 homes his representatives visited refused to speak with them.

Marilu Marroquin, president of a regional farmer’s association, has emerged as a new leader of the Tia Maria opposition since Jose “Pepe Julio” Gutierrez was jailed as authorities conduct an extortion investigation. Two other key leaders from this year’s protests, Jesus Cornejo and Jaime de la Cruz, face court orders curtailing their participation in demonstrations.

Marroquin demanded the closure of a Tia Maria camp unless Cocachacra district mayor Elar Valencia can show the company’s license to operate. She also pressed Valencia to declare his position toward the Tia Maria mine.

Marroquin and other leaders have organized small marches in the region to commemorate those who died in protests between March and May of this year.

On Saturday Marroquin will meet with other opposition leaders in a public assembly to decide whether the movement will hold a 48-hour or indefinite strike. They requested the attendance of local district mayors from Cocachacra, Dean Valdivia and Punta de Bombon to confirm their positions in regards to the mine.

“We will not allow [Southern Copper] to scare us,” Marroquin said. “Perhaps they believe that they will convince us with the renovation of the El Arenal parish.”

An indefinite strike which started in March against the Tia Maria project resulted in four deaths, one of which was a police officer, prompting President Ollanta Humala to declare martial law in the Islay province of Arequipa. Peace was restored and the emergency expired in July, but thousands of police and military remain in the region.

Peru debates classifying use of grenades as terrorist attacks