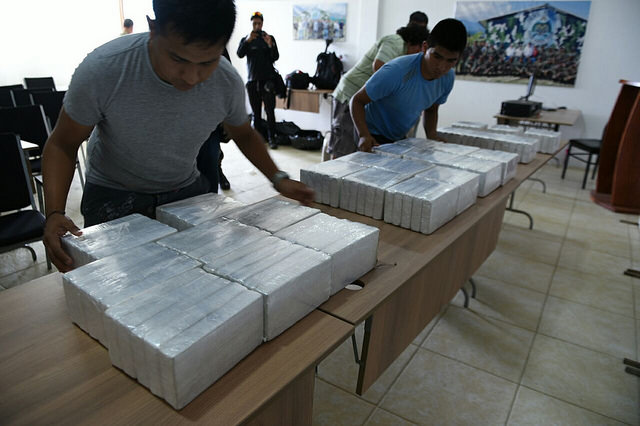 Armed police in Peru clashed with drug traffickers this week while raiding a cocaine factory in the south of the country.

Using helicopters, officers busted three mega-laboratories and found a total of 205 kilos of cocaine, seven tons of chemicals used for the manufacturing process of the drug, and weapons.

During one of the raids, carried out in the district of Santa Rosa, province of La Mar, Ayacucho on November 28, police were involved in a tense armed confrontation with the gangsters, according to reports by La República.

The criminals fled the region known as Valle de los Ríos Apurímac, Ene y Mantaro (or VRAEM), abandoning 134 kilos of cocaine hydrochloride, three and a half kilos of the drug in liquid form and 65 kilos of alkaloid solution.

Shotgun shells and communication radios were found. The Anti-drug Department of Kimbiri is now holding onto the goods.

In two of the other laboratories, six tons of gasoline, sodium metabisulfite, acetone, sulfuric acid and hydrochloric acid were found, as well as six bricks of high-purity cocaine, two shotguns, ammunition, utensils, microwave ovens, presses, distillers and other tools used to make the drug.

The operation, named ‘Encarnación I’, was carried out by brigades of the Police Component and the Special Command of the VRAEM rivers.

One of the poorest regions in the country, VRAEM currently produces 70 percent of the Peru’s cocaine.

In August, VRAEM police found a high-tech laboratory in the town of Nuevo Paraíso, Kimbiri, in the province of La Convención, Cusco, along with one ton of cocaine alkaloid.

Ayacucho, the location of the drug busts, is a mountainous region in VRAEM, located in the south-central Andes of Peru, which was once hit hard by the internal conflict in the country of the 1980s which saw 70,000 people die.

The rural district of Santa Rosa is mainly made up of indigenous Quechua people.