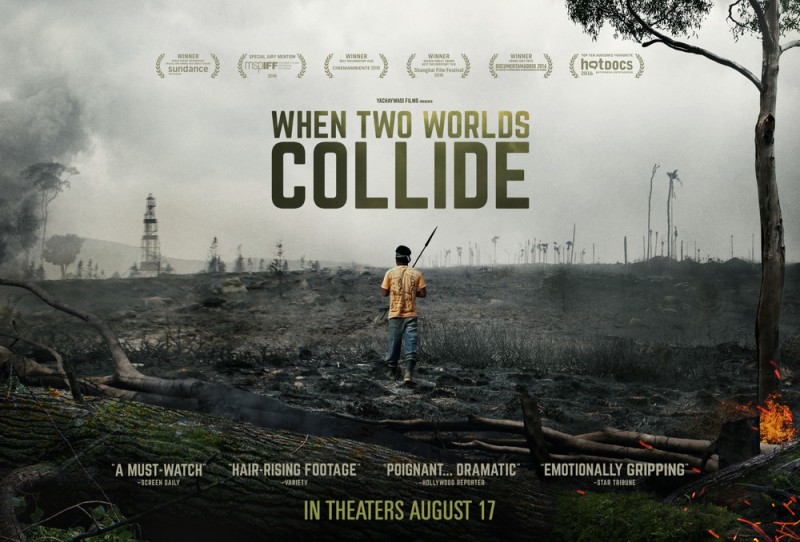 “When Two Worlds Collide,” a documentary about the “Baguazo” conflict which left 33 people dead, opened in theaters in the United States on Wednesday.

The Sundance award-winning documentary showcases the 2009 Baguazo conflict in the Bagua province of Peru’s Amazonas state. Thirty-three people, including 23 police and 10 protesters, were killed in clashes over the development of an oil license in the Amazon jungle.

The documentary uses news broadcasts and original footage chronicling the political crisis and ensuing violence between indigenous communities of the jungle fighting and Peru’s government and political class. Directors Heidi Brandenburg and Mathew Orzel document the local opposition in Amazonas as far back as 2007, two years before the conflict erupted.

“The outsized protagonists are indigenous leader Alberto Pizango, who the filmmakers closely shadow, and Alan Garcia, the vainglorious Falstaff of a president whose open contempt for the natives makes it easy for the filmmakers to cast him in a villainous pall,” writes Frank Bajak, former Associated Press editor for the Andean region.

“The result is fast-paced drama: indignant natives mobilize in the interior. Opposition lawmakers in Lima foreshadow disaster after the pro-Garcia majority blocks debate to reconsider legislative decrees the natives reject as usurping their communal lands for oil, gas and timber development.”

The native protesters, some with faces painted and carrying traditional weapons, blocked a key access road known near the beginning of the jungle. The government sent in police to clear the road, resulting in weeks of clashes which dozens dead and hundreds injured. The conflict presented an existential crisis to Alan Garcia’s government, culminating in the resignation of Cabinet chief Yehude Simon.

The film won the Sundance Film Festival’s World Cinema Documentary Special Jury Award for Best Debut Feature among other prizes from festivals in Minneapolis, Turin, Madrid and Shanghai. It has been hailed as “emotionally gripping,” “dramatic” and “a must-watch” with “hair-rising footage” in various reviews.

Some critics have called the film biased toward the cause of the natives and protection of the Amazon jungle against extractive industries.

“The issues presented in ‘When Two Worlds Collide’ are so crucial that it feels churlish to characterize it as a dutiful, and ultimately pedestrian, documentary. There is something evasive about it as well,” writes Glen Kenny in the New York Times.

“Late in the movie, we see Mr. Pizango speaking with the father of a police officer who disappeared amid the violence tied to the protests, and his manner is chilly to the point of calculating — he’s no longer the soulful man of the people that Ms. Brandenburg and Mr. Orzel have been portraying.”

Dennis Harvey calls the film an “unabashedly partisan depiction” in his review for Variety. His take on the filmmakers’ perspective is supported by the film’s official website.

“Tweet, post, share the film and the issues at its heart. The further we can spread the word about what’s happening to the Amazon the greater our chances are of conserving species and protecting the rights of its indigenous peoples,” according to the website.

Land rights are an increasingly relevant issue in Peruvian politics which quickly descends into violence. The mining-driven economy which has led Latin America for the last decade faces a difficult challenge after a fall in commodity prices.

The country would have to grow mining and energy production just to maintain current growth. At the same time, extractive industries and specifically their effect on the environment and water sources are an increasingly hot-button issue among indigenous and local communities. Meanwhile, illegal mining and logging has deforested large swaths of the Amazon, the world’s most biodiverse rainforest. A documentary in Peru could not find a more topical subject.

Watch the film’s trailer below.