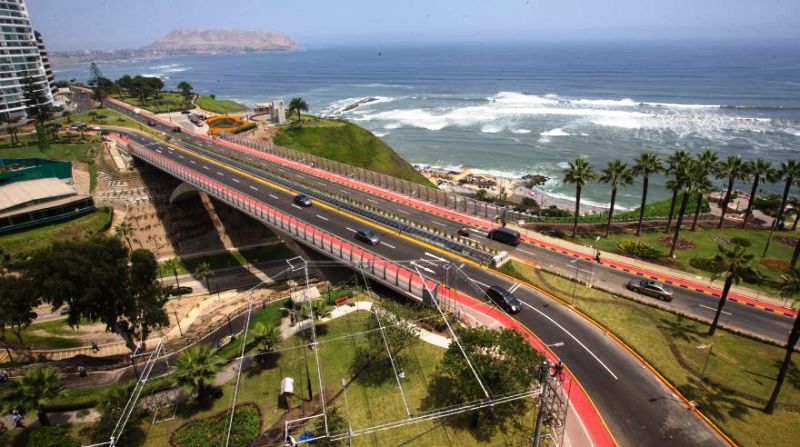 The bridge connected the north and south sides of the Miraflores cliffs above the Bajada Balta road which leads down to the seaside Costa Verde highway. Its expansion from two lanes to four is expected to reduce traffic on the Malecon Cisneros and Malecon de la Reserva roads overlooking the sea by 40%.

“It is a project with an important urban and neighborhood impact, which allows us to integrate pedestrian, cyclist and driver,” Miraflores mayor Jorge Muñoz told Andina.

The bridge is located between two of Lima’s top tourist destinations. On the north side of the Villena Rey bridge is the famed Park of Love, which features an iconic statue of a couple in embrace overlooking the Pacific Ocean. The upscale Larcomar shopping mall sits less than a half mile south of the bridge. The bridge was also fitted with colored lights to enhance the view of the coast at night.

“A bridge of grand dimensions always gives character to a city,” Muñoz told El Comercio. “And that is achieved with this imposing structure, which has become an icon of Miraflores and Lima.”

Construction of the $6 million upgrade began in January 2015. The project was funded in equal parts by the district of Miraflores and Peru’s housing ministry.