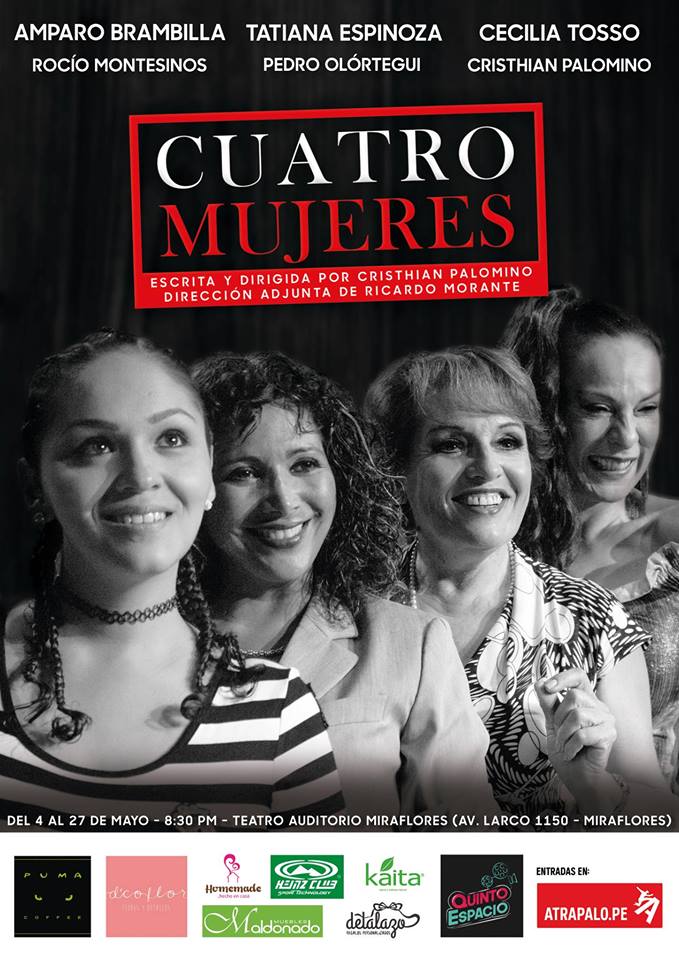 A new play paying tribute to all mothers, Cuatro Mujeres (Four Women) starts its run today at the Miraflores Auditorium.

Directed by Christian Palomino and Ricardo Morante, the play shows four different women in different stages of their life, all united by the common theme of motherhood, which they are all dealing with in a different way.

“This play was born as a homage to the different types of mothers that I know, from an understanding, friendly and mature perspective,” Palomino explained to Agencia Andina. “My principal source of inspiration was my mum, with whom I have a great relationship, but also my friend’s mums, the mums in my family, those who assume the role but it doesn’t quite fit them.”

The play is made up of three stories, each in two parts. ‘Sobre Lluvia’ (About rain) is about a woman who has just discovered she is pregnant, but for some reason it’s impossible for her to have the child. Marla enters the stage and both simplifies and complicates the situation by wanting the child for herself.

‘La mujer de la banca,’ (The bench woman) shows a young person who enters a park at midnigh, but doesn’t sit on a bench as it seems to belong to someone else; Vanessa, a woman who is prepared to turn herself into a man.

‘Segunda oportunidad,’ (Second opportunity) describes a women in full mourning for her husband who agrees to meet an old flame. He wants to stay, but she refuses him to find a new opportunity for herself in her twilight years.

Women and motherhood has complicated roots in Peru, which has one of the strictest laws against abortion in Latin America. NGO for women’s reproductive freedom Women on Waves states that an abortion is is only permitted if the life of the woman or unborn child is in danger, and if a woman aborts illegally she could be sentenced to up to two years in prison.

Palomino is playing with the religious and societal stereotype that women are placed on this earth to have children and populate the land, regardless of their personal choice. He is showing that all women are individuals that approach motherhood in completely different ways.

The play stars Tatiana Espinoza, Rocío Montesinos, Amparo Brambilla, Cristhian Palomino, Cecilia Tosso and Pedro Olórtegui, with a musical accompaniment of José Sonner. It is running from May 4 until the 27 on Friday, Saturdays and Sundays.