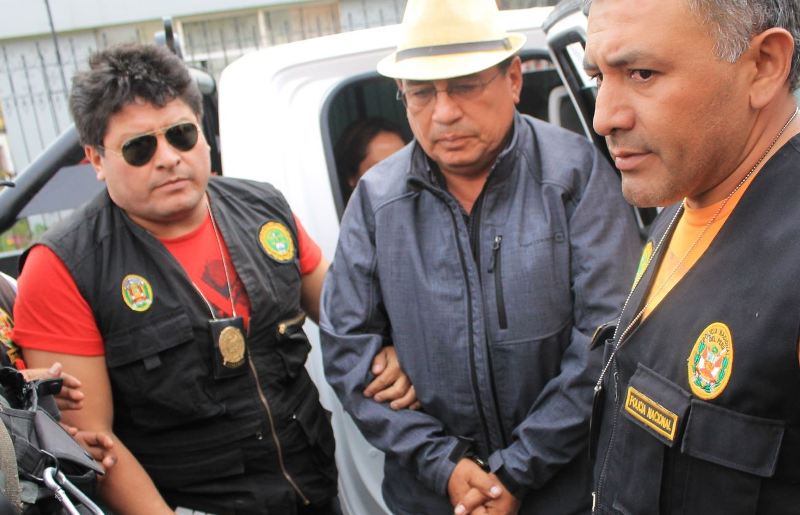 Facing mounting evidence of extortion, jailed anti-mining leader Pepe Julio Gutierrez has been effectively sidelined from the opposition to the Tia Maria copper mine in southern Peru.

Tambo Valley Defense Front president Jose “Pepe Julio” Gutierrez was arrested last Friday for allegedly soliciting a $1.5 million bribe from Southern Copper to end protests against the company’s $1.4 billion copper mine project in the Islay province of Arequipa. The initial 24-hour detention was subsequently extended for seven more days so prosecutors could verify Gutierrez’s voice on audio recordings submitted by an Arequipa lawyer who had worked for Southern Copper. If judges agree to preventive jailing during investigations, Gutierrez could be in jail for 18 months.

Two key leaders of the Tia Maria opposition were quick to distance themselves from Gutierrez after being implicated in the extortion recordings. Prosecutors questioned Dean Valdivia district mayor Jaime De La Cruz and Tambo Valley Farmers Board president Jesus Cornejo, who Gutierrez mentions in the recordings as being complicit in ending the protests for a bribe. De La Cruz and Cornejo have denied any such agreement with Gutierrez, and Cornejo called for his expulsion as soon as the recordings were published on YouTube last month.

Prosecutors are also mounting pressure to repeal a suspended sentence Gutierrez and other anti-mining leaders received for blocking a road in Tia Maria protests from 2011. In the same audio recordings in which he negotiates an end the protests, Gutierrez mentioned a bribe he paid to Mollendo judge Yanet Lastra. On Monday Lastra refused to repeal the suspended sentence, prompting prosecutors and government officials to call for her removal from the case.

“The judge should remove herself from the process,” justice minister Gustavo Adrianzen said from Arequipa’s Umacollo stadium, where he visited a group of refugees who fled Islay province after receiving threats because they do not support the Tia Maria protests. “Mollendo is not a safe venue because it does not offer guarantees for the administration of real justice … We cannot allow judges involved in audios to continue leading the process.” Adrianzen added that the court venue should be changed from Arequipa to Lima given the political climate of the region.

Just when things could not seem to get worse for Gutierrez, the full audio recordings were released yesterday and Peruvian newspapers included a new sound bite in headlines. In asking for the money upfront, Gutierrez threatens “I will burn Troy!” in the event Southern Copper does not pay him after he quells the opposition. Gutierrez also solicits Southern Copper’s help in a future election campaign for congress.

Gutierrez’s uncertain position as a leader of the anti-mining protests comes when both sides have called for a “pause.” The Tia Maria opposition announced yesterday it will stop the protest for 10 days so farmers can harvest the rice fields, and Southern Copper announced a 60-day pause on Saturday to “listen and engage” local residents.

Prime minister Pedro Cateriano announced the government will organize a series of public debates about the Tia Maria project in cities throughout the country including Arequipa and Lima. President Ollanta Humala has sent representatives from the interior, agriculture, mining and environmental ministries to set up offices in Islay province to create a permanent “nexus” between the government and residents.

President Ollanta Humala deployed the Peruvian military to restore order in Islay province last week after protesters killed a police officer. Indefinite protests which began March 23 have led to four deaths and over 200 injuries. Negotiations have failed twice. Local farmers concerned for the environment have demanded that Southern Copper abandon the $1.4 billion copper mine. Tia Maria protests have resulted in six deaths since 2011.